Please ensure Javascript is enabled for purposes of website accessibility
Log In Help Join The Motley Fool
Free Article Join Over 1 Million Premium Members And Get More In-Depth Stock Guidance and Research
By Brian Stoffel – Updated May 6, 2019 at 11:46AM

Will these investments pay off?

Pets have long been an integral part of many American families, but what about insuring their health? That's often been overlooked, and Trupanion (TRUP -0.32%) is trying to change that.

The company offers health insurance that covers dogs and cats primarily in North America. Trupanion's first-quarter earnings show that it continues to gain share in this oft-ignored market. But it has come at a cost. Read below to see why. 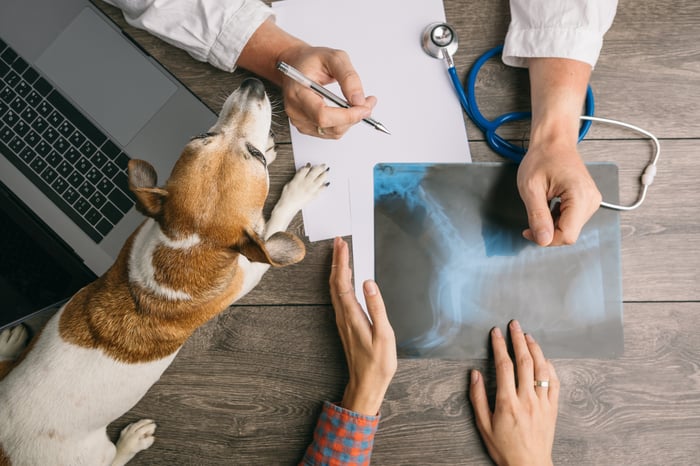 Let's first review how the company performed on headline numbers.

The results came in slightly higher than management's forecast three months ago. Overall, Trupanion showed solid leverage: While revenue was up 25%, non-GAAP spending on technology was up 23%, and general and administrative spending was up 20%.

However, when it came to sales and marketing, it was a different story. Non-GAAP spending in this area jumped 38% to $7.8 million. This caused pet acquisition costs to jump 10% sequentially and 24% year over year.

On a conference call, CEO Darryl Rawlings said the increase was due to the fact that management seized an opportunity: "During the quarter, the pet acquisition team deployed $7.8 million of our adjusted operating income with estimated internal rates of return at the upper end of our targeted 30% to 40% range. Our pet acquisition spend in the quarter reflects investments in additional head count for both our lead and conversion teams, as well as a small increase in our direct-to-consumer spend."

Rawlings went on to explain that 70% of that is devoted to core customer acquisition channels -- like getting independently contracted Territory Partners into vet clinics. But the other 30% is split between growth channels like direct-to-consumer (something Rawlings said was growing nicely), and various tests. Regardless of where it was spent, he assured investors the rate of return on the investments was solidly between 30% and 40%.

Skeptics might recall that the company has come under fire for some of the practices of its Territory Partners in the past year. Specifically, short-sellers have accused the company of not having licensed representatives selling to customers. Regulatory agencies have opened investigations into these practices, but few major penalties have been handed down.

Rawlings addressed those concerns head-on in his annual shareholder letter:

"We did not have sufficient focus on deepening relationships with regulators, nor did we provide the team with sufficient resources to do so. ... We made some mistakes and, quite frankly, did not adequately prioritize the importance of complete compliance with the applicable insurance regulators. Over the last few years, we have paid some fines for these mistakes, and we will likely pay additional fines for these previous mistakes. Although I am certainly not thrilled to pay them, I believe they are justified and appropriate."

Trupanion has a bevy of specific metrics it likes to publish. Across the board, they all showed solid improvements.

During the previous year, the monthly churn of pets prior to their 90-day window was 2.9% -- far higher than those who stay beyond the initial 90 days. Overall, this cohort makes up about 20% of all insured pets for Trupanion.

Rawlings said improving this retention rate was going to be the highest priority for the year ahead. Pet owners often leave before this window closes because they are hoping to get insurance for an ailment that Trupanion can't or won't cover. Rawlings said educating pet owners on the benefits of insurance -- even when a specific ailment isn't immediately covered -- will be key to improving this metric.

For Trupanion's second quarter and full fiscal year, management expects revenue to come in at a midpoint of $91 million and $374 million, respectively. If it hits these targets, it will represent growth of 24% and 23%, respectively.