Please ensure Javascript is enabled for purposes of website accessibility
Log In Help Join The Motley Fool
Free Article Join Over 1 Million Premium Members And Get More In-Depth Stock Guidance and Research
By Jeremy Bowman – May 6, 2019 at 12:25PM

Shares of the eatertainment chain moved higher in April after a strong earnings report.

Shares of Dave & Buster's (PLAY 6.00%) gained ground last month after the arcade purveyor posted better-than-expected results in its fourth-quarter earnings. The stock gave up those gains later after Chuck E. Cheese filed for its IPO, but then bounced back in the second half of the month amid generally strong earnings reports from restaurant stocks.

As a result, the stock finished the month up 14%, according to data from S&P Global Market Intelligence. The chart below shows the ups and downs of the stock over April. 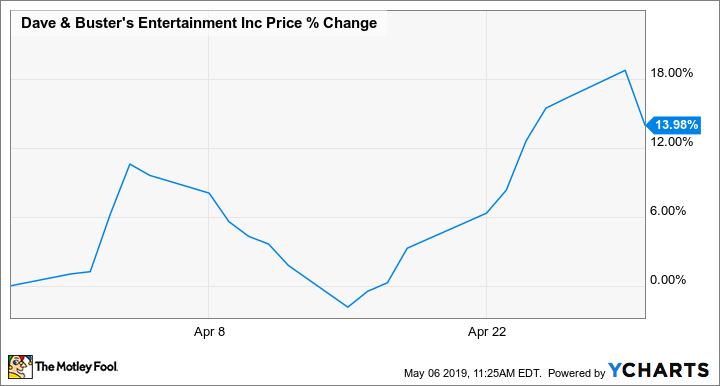 Dave & Buster's, known for its eat-and-play establishments, got a boost after the company turned in a solid earnings report on April 2. Comparable sales rose 2.9%, its best performance in several quarters, and adjusted earnings per share increased from $0.66 to $0.75, which easily beat estimates at $0.63. Dave & Buster's shares rose 9% over the next two days as the company seemed to put its recent struggles behind it. It also launched its first proprietary virtual reality title, Dragonfrost, helping to refresh its games line-up.

However, the company quickly gave up those gains, apparently in part because of Chuck E. Cheese's decision to file to go public, signaling an expansion of the children's pizza-and-arcade chain. While Chuck E. Cheese isn't really a direct competitor to D&B -- it appeals more to children while Dave & Buster's sells alcohol and is geared toward young adults -- investors nonetheless seemed to perceive it as a threat.

Though there was no news out on Dave & Buster's in the second half of the month, the stock rose as restaurant chains like Chipotle reported strong earnings numbers and the broader stock market crept toward all-time highs.

Looking ahead, Dave & Buster's full-year outlook made it clear that the company still has some work to do in order to get back to its former heights. Management sees comparable sales rising between flat and 1.5% this year, and expects net income of $105 million-$117 million, which is actually down from the $117.2 million it reported last year. Management has historically been conservative about guidance and is also aggressively buying back shares so earnings per share could still rise this year. However, investors may want to temper any expectations of a sudden surge.