Please ensure Javascript is enabled for purposes of website accessibility
Log In Help Join The Motley Fool
Free Article Join Over 1 Million Premium Members And Get More In-Depth Stock Guidance and Research
By Billy Duberstein – May 7, 2019 at 9:00AM

The media giant is becoming an arms dealer in the streaming wars.

CBS Corporation (PARA -3.35%) released its first quarter earnings report, and results were mixed. Earnings per share met analysts' expectations, though revenue fell a tad short due to lumpy licensing in the cable division. Still, CBS posted strong advertising and affiliate fee growth, and the company reaffirmed its financial outlook for the full year.

CBS trades at a fairly low valuation given its performance, but it's also a company in flux. Long-time CEO Les Moonves resigned from his post back in September amid sexual misconduct allegations. Additionally, the market is expecting CBS to acquire beleagured media partner Viacom (NASDAQ: VIA) (VIAB) some time this year. Add in concerns over the emergence of big tech streaming platforms, and investors just aren't willing to give CBS a look these days. 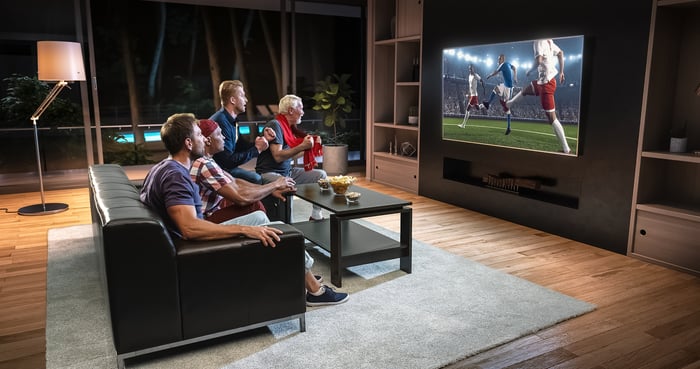 Even though the streaming revolution is really taking off, CBS isn't resisting the phenomenon. In addition to having two of its own OTT (over-the-top) streaming services -- CBS All-Access and Showtime direct-to-consumer -- CBS is gladly producing shows for other leading streaming companies such as Netflix and Walt Disney. The new Netflix show Dead to Me was produced by CBS, and its upcoming Diary of a Female President will premiere on Disney+ in August.

In fact, CBS is now producing shows not only for its own platforms but 15 outlets in total, triple the number from just three years ago. While some may feel that the rise of streaming outlets is a threat, management's choice to license shows to competitors allows CBS to say "yes" to more ideas that come through its studio. For instance, if a writer under contract with CBS has an idea that may not fit with the company's flagship station or Showtime but may be a good fit for Netflix, CBS can still greenlight the idea.

That allows CBS to crank up its content spending, which will rise from $7 billion last year to $8 billion this year, rivaling that of the biggest streamers. And while its streaming partners will get the initial benefit of any hits CBS creates, CBS will retain the rights to the show after its initial license runs out, giving it future optionality.

Getting the Super Bowl back

This past quarter also saw strong advertising revenue, up 18%, which was driven by CBS hosting the Super Bowl this year. Instead of getting the big game back in three years, as is customary, CBS is actually going to get it back in two years, in 2021. That's because NBC had the Winter Olympics that year, which could have resulted in a potential conflict with the Super Bowl.

Ianiello was quick to point out that 2020 is a Presidential election year, and 2022 is a mid-term election year, so CBS should actually see elevated ad spending for three years in a row.

Getting back to CBS' own streaming service, management highlighted that All-Access and direct-to-consumer Showtime subscriptions reached eight million combined subscribers in the first quarter. Ultimately, the company has a goal of signing up 25 million direct-to-consumer subscribers by 2022. While that's far below other leading competitors, CBS services exhibited their highest quarterly sub growth to date last quarter.

Some investors may feel these subs may only cannibalize former cable subs, but CBS' affiliate revenue grew a strong 13% in the quarter, suggesting that cannibalization isn't really happening. Management also said their internal surveys showed 70% of All-Access subs subscribed to a multi-channel cable package as well, using the service as a premium add-on rather than a substitute.

By all appearances, CBS is a cheap stock and will likely continue to be one until its long-term CEO search is concluded, as well as the Viacom merger drama. However, for those with faith that CBS will pay a fair price for Viacom, or that CBS will improve Viacom's prospects, the stock certainly seems undervalued given its recent performance, especially in a rather pricey market.

Thus, value investors with lots of patience may find CBS an attractive opportunity right now, though others may wish to see how the the big changes ahead work out before diving in.