Please ensure Javascript is enabled for purposes of website accessibility
Log In Help Join The Motley Fool
Free Article Join Over 1 Million Premium Members And Get More In-Depth Stock Guidance and Research
By Danny Vena – Updated May 8, 2019 at 8:21AM

The e-commerce giant's 12th such store will accept paper money, acceding to critics and customer preferences.

While Amazon.com (AMZN -3.01%) is best known for its dominant e-commerce platform, it's the company's growing number of brick-and-mortar stores that will mark the next phase in its evolution. Amazon is slowly growing out its Amazon Go convenience stores, with plans for as many as 3,000 by 2021.

The company on Tuesday announced the opening of its 12th Amazon Go location, the first such store to debut in New York City. Like the ones before it, the Go store will focus initially on offering a host of quick grab-and-go meal items and snacks for shoppers in a hurry.

Unlike the other locations, though, the New York City store will be the first to accept cash. 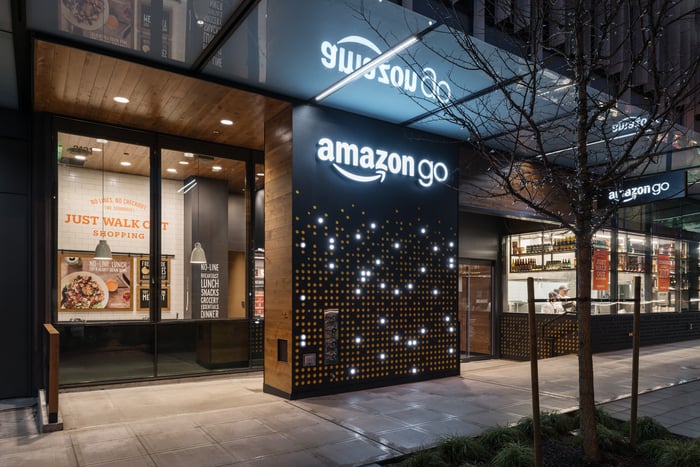 Amazon's rollout of its Go stores is still in its early stages, and the company has been testing a variety of selections, location sizes, and formats. The common theme among each of the stores is that once customers have downloaded the Amazon app on their smartphone, they can scan a code to enter the store, do their shopping, and walk out -- bypassing the checkout process. Using a combination of computer vision, machine learning, and a variety of sensors, the system tracks what customers remove from shelves as they shop and the app charges their account after they leave.

The New York store still won't have a cash register, but an Amazon employee will be available to check in customers who want to pay with cash and scan their purchases with a mobile device and accept their payment when they are ready to check out.

In the process of launching the stores, the company waded into a public relations and regulatory quagmire as a growing number of city and state governments pushed back against Amazon and other retailers for not accepting cash payments. Some said the stores discriminated against low-income and homeless customers, as well as those without smartphones and credit cards.

The reaction by various municipal and state governments was swift. The city of Philadelphia instituted a ban on stores that don't accept cash in early 2019, quickly followed by New Jersey, which issued a statewide moratorium. A host of other locales, including New York City and San Francisco, are considering or implementing similar legislation. Massachusetts had barred cash-free stores as far back as 1978.

Early last month, Amazon moved to quiet the growing protest over its stores, signaling that it was instituting plans to accept cash at its Go stores. At a company meeting, executives informed employees that they were working on "additional payment mechanisms." For instance, the company recently began accepting Supplemental Nutrition Assistance Program (SNAP) benefits, a U.S. government program that augments the food budgets of needy families. Amazon also launched a new option called Amazon Cash, which allows customers to bring money to 7-Eleven, GameStop, or CVS stores to process cash funds into their digital accounts.

The way Amazon accepts cash will evolve in the future, according to Cameron Janes, who oversees Amazon's physical stores. "This is how we're starting," he said. "We're going to learn from customers on what works and what doesn't work and then iterate and improve it over time."

More important things to worry about

Amazon's revenue growth has slowed dramatically over the preceding four quarters, recently up just 17% year over year, down from 43% growth at the same time last year. While that's understandable considering the $60 billion in sales the company generated in the first quarter, investors are eager for the next phase of Amazon's growth.

By accepting cash at its Go stores, Amazon is welcoming as potential customers the lower-income population and those who choose to avoid credit cards and smartphones. It's also removing an unnecessary distraction from its plate. Amazon's time is better spent pursuing growth than becoming a high-profile target for government regulators.

Editor's note: This article has been updated with the correct spelling of Cameron Janes' name.