Please ensure Javascript is enabled for purposes of website accessibility
Log In Help Join The Motley Fool
Free Article Join Over 1 Million Premium Members And Get More In-Depth Stock Guidance and Research
By Todd Campbell - May 7, 2019 at 7:46PM

After securing a landmark approval for the use of its marijuana medicine Epidiolex in two rare forms of epilepsy last year, GW Pharmaceuticals (GWPH) reported impressive clinical trial results yesterday that could double its addressable market next year. In phase 3 studies, Epidiolex reduced the risk of monthly seizures by 48% in patients with tuberous sclerosis complex, a genetic disorder.

Marijuana as an epilepsy medication

Marijuana is comprised of over 100 chemical cannabinoids that can interact with receptors in the brain and nervous system, including cannabidiol, or CBD, the second-most common cannabinoid. 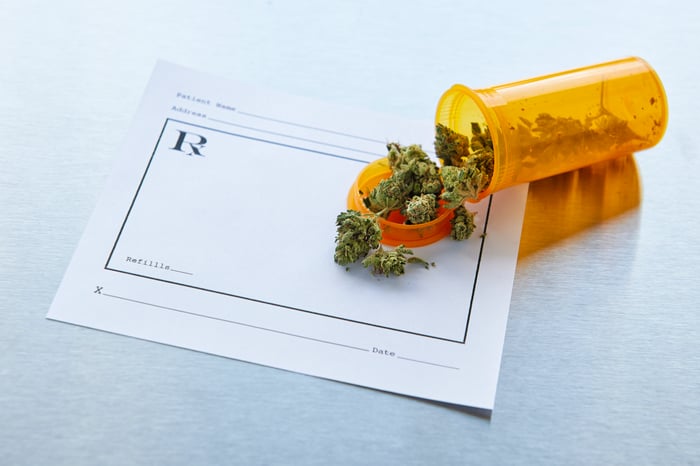 Although there have been anecdotal reports for years of marijuana's efficacy in reducing seizures, GW Pharmaceuticals was the first drug developer to scientifically evaluate the effectiveness of CBD in reducing seizures in patients in order to secure Food and Drug Administration approval.

The company's purified CBD oil, Epidiolex, was studied in over 2,000 patients participating in four phase 3 studies. Those studies showed a daily dose of Epidiolex lowered the number of seizures experienced by Dravet syndrome and Lennox-Gastaut syndrome patients by over 40%. Importantly, Epidiolex's benefits were evident up to two years later.

The results were particularly impressive because Dravet syndrome and LGS are notoriously hard to treat with existing antiepileptic medications. Those participating in trials had tried and discontinued an average of four prior treatments.

Epidiolex's performance in trials allowed the company to win an FDA greenlight in June 2018. Its safety and resistance to abuse led to the U.S. Drug Enforcement Agency's classifying it as a schedule V drug in September, putting it on par with cough medicines that contain codeine.

Following the DEA's decision, GW Pharmaceuticals officially launched Epidiolex in the U.S. last November at an average price of $32,500 per year. Since then, the company has secured insurance coverage for 80% of people covered by commercial insurance plans, including 30 million who can access Epidiolex without prior authorization in plans covered by the national formulary Express Scripts.

The FDA's seal of approval means use of the drug is legal throughout the U.S., regardless of federal marijuana prohibition, and expanding insurance coverage could make Epidiolex a top seller.

The market opportunity in Dravet syndrome and LGS is limited because those indications affect only an estimated 45,000 people in the United States. Nevertheless, most of these patients find their symptoms inadequately controlled by existing medications, so Epidiolex could eventually become a blockbuster drug, especially if the FDA expands its use to other indications.

The chance of that happening looks pretty good based on its results in tuberous sclerosis complex, or TSC. The noncancerous tumors caused by this disorder cause seizures in up to 90% of the estimated 50,000 people with TSC in the U.S., and more than half of those patients are resistant to traditional epilepsy drugs.

In 224 TSC patients, a 25-milligram daily dose of Epidiolex reduced seizure frequency by 48.6% from a baseline average of 57 seizures per month. That's statistically and significantly better than the 26.5% reduction observed in the placebo arm of the study. As in other studies, participants in this trial were heavily pretreated, having tried and failed to respond to an average of four prior antiepileptic drugs.

GW Pharmaceuticals plans to put together a supplemental application to secure FDA approval for Epidiolex in TSC in the fourth quarter of 2019. If it delivers on that promise, an FDA decision should come down sometime in the second or third quarter of 2020, depending on when the FDA officially accepts the application.

Epidiolex's opportunity in TSC, however, isn't the only catalyst that could double its addressable market. A key European advisory committee is expected to weigh in with an opinion on Epidiolex this quarter. If the committee recommends it, Epidiolex could soon be available to Dravet syndrome and LGS patients in Europe, too, paving the way for sales to increase significantly through 2020.