Please ensure Javascript is enabled for purposes of website accessibility
Log In Help Join The Motley Fool
Free Article Join Over 1 Million Premium Members And Get More In-Depth Stock Guidance and Research
By Chris Neiger – May 7, 2019 at 7:15AM

The ridesharing leader, which will likely debut as a publicly traded stock this week, may be its own worst critic.

Uber's much-anticipated IPO is just days away, and the company has plans to list its shares at around $44 to $50 (current estimates) and raise about $9 billion from the offering. The company is a dominant force in the global ridesharing market with about 91 million monthly active platform users worldwide. It controls about 60% of the U.S. ridesharing market.

Despite the company's prominence in ridesharing, there are several reasons investors should be wary of buying Uber's stock right now. And it's not just the Uber skeptics who are ringing alarm bells. The company itself has made several comments that cast doubt on its ability to succeed. 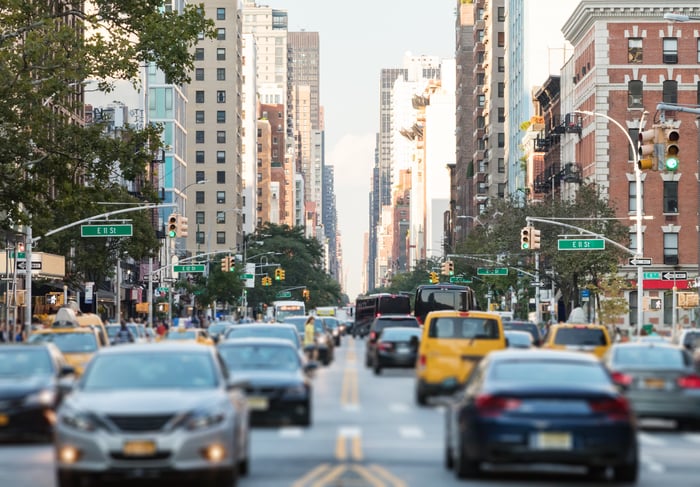 1. "We expect our operating expenses to increase significantly in the foreseeable future ..."

In Uber's April 11 S-1 filing, the company said in its risk factors section:

We have incurred significant losses since inception, including in the United States and other major markets. We expect our operating expenses to increase significantly in the foreseeable future, and we may not achieve profitability.

Uber had operating losses of $4 billion in 2017 and $3 billion in 2018, and its comments suggest no end of losses is in sight. The company further explained, "We anticipate that we will continue to incur losses in the near term as a result of expected substantial increases in our operating expenses ... ." Uber added that its efforts to grow its business may increase expenses more than it anticipates and that its sales may not grow enough to offset these potential rising costs.

It's true that no company can guarantee its investors that the money it spends to grow its business will eventually pay off. But Uber's expectation for substantial increases to its operating expenses when it is still hugely unprofitable suggests the company's financials are precarious.

2. "If they want a predictably profitable company, go buy a bank."

This quote came from CEO Dara Khosrowshahi near the end of a presentation at Stanford University's business school near the end of 2018. Uber lost an estimated $1 billion in the first quarter of this year, but that doesn't seem to faze Khosrowshahi. For context, he said:

We're not going to have predictable profitability. We'll say it to our shareholders, and the shareholders can choose. If they want a predictably profitable company, go buy a bank. Really, the long-term [success story] is what we're after.

It's great that Khosrowshahi is focused on Uber's big picture, but that doesn't mean it's any more comforting for investors to hear that there's no timeline for reaching profitability. It's easy to brush this comment aside and assume that profits will materialize later on (and they may). But most analysts agree that the likely path to profitability is for Uber to substantially increase how much it charges for rides.

If Uber does increase prices, it could potentially drive down how often riders use the company's service, which could hurt sales. Uber already saw its revenue growth slow in 2018 to 42%, down from a revenue jump of 106% in 2017.

3. "Regulations impose legal restrictions and other requirements on operating our Ridesharing products ..."

Uber is facing increasing regulatory hurdles, and potential investors would be wise to take notice. In addition to the quote above, the company said in its S-1 filing:

Regulations that permit or limit our ability to provide Ridesharing in certain markets impact our financial performance. For example, in August 2018, New York City instituted a limit on new vehicle licenses for offerings like ours for one year. As a result, we expect growth to be adversely affected in New York City.

That's a big admission from Uber since New York City is the largest U.S. city and Uber's most significant domestic market.

The bad news is that these regulations are starting to ramp up and have a real impact on Uber's financials. The company recently stopped hiring new drivers in New York to abide by newly instituted wage laws and driver limitation restrictions.

Additionally, drivers in eight U.S. cities say they will go on strike this Wednesday and are calling for more job security, a cap on commissions to ridesharing companies, and laws that would require drivers get 80% to 85% of rider fares.

And Uber isn't just facing domestic regulations. The company recently noted, "Due to current regulations, our Personal Mobility offering does not have a major presence in Argentina, Germany, Italy, Japan, South Korea, or Spain."

Ridesharing is still a young industry. As more cities struggle to manage rising traffic problems, displaced taxi services, and outspoken ridesharing drivers, you can bet that new laws will be developed, and they are unlikely to be good for Uber's bottom line.

Uber is about to go public, and it's anyone's guess just how well the company will perform in the coming years. But it's essential for investors to realize that, if they buy Uber's stock, it's not a guaranteed win. Ridesharing regulations and competition could stifle Uber's growth and force the company to make adjustments to how much it charges users and how much it pays drivers.

That doesn't mean Uber will end up being a bad investment. It just means the road to Uber's long-term success will likely be bumpy and slow, at best. As the hype around Uber's IPO intensifies this week, take that into consideration before considering whether you go along for the ride.