Please ensure Javascript is enabled for purposes of website accessibility
Log In Help Join The Motley Fool
Free Article Join Over 1 Million Premium Members And Get More In-Depth Stock Guidance and Research
By Dan Caplinger – May 8, 2019 at 9:48AM

The kitchen-equipment maker is moving forward under a new leader.

For kitchen-equipment specialist Middleby (MIDD -1.02%), last quarter's announcement that longtime CEO Selim Bassoul would be leaving the company came as a less-than-pleasant surprise. Bassoul has brought Middleby so far that some worried that the company would see its progress stall without his leadership. Yet that didn't stop Middleby from making an executive transition and finding ways to make the most of the situation.

Coming into Wednesday's first-quarter financial report, Middleby investors were insistent that they wanted to see the company keep up its momentum from past quarters. Middleby's results were solid and spoke well to the sustainability of the company's business model -- regardless of who's at the helm. 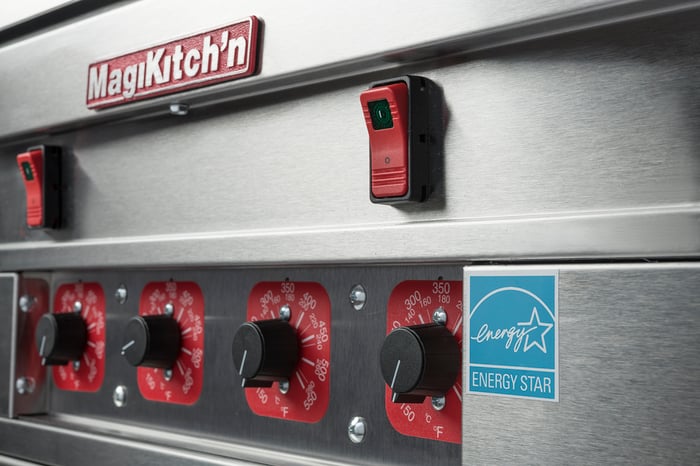 Middleby's first-quarter results maintained a similarly healthy pace of growth that the kitchen-equipment specialist has tried to produce consistently. Revenue climbed 17%, to $686.8 million, which was a bit higher than what most of those following the stock had foreseen. Net income climbed almost 6%, to $69 million, and after adjusting for some transitional costs, adjusted earnings of $1.38 per share topped the consensus forecast among investors by $0.01 per share.

Middleby continued to get the lion's share of its revenue growth from acquisitions, but its core business wasn't completely flat. Organic growth came in at 2.9%, as foreign exchange cost Middleby about 2 percentage points of growth. Newly acquired businesses produced the remainder of the top-line gains.

From a segment perspective, Middleby saw growth in two of its three main divisions. The commercial foodservice equipment business continued to lead the company forward, with its 27% growth rate coming mostly from four acquired businesses. Organic growth for the division was 3.4%.

Meanwhile, in residential-kitchen equipment, sales were flat, but after adjusting for closing a non-core business, double-digit growth for the Viking brand sent adjusted segment revenue higher by 5.5%. It was the food-processing equipment division that struggled, with organic sales declines of 3.2% needing an upward boost from three key acquisitions to keep the segment's top line on the rise.

Some good news came from the margin front. Gross margin climbed more than a percentage point, to 37.5%, with higher profitability in the residential-kitchen equipment group accounting for the bulk of the improvement.

Can Middleby keep up the momentum?

New CEO Tim FitzGerald highlighted all the progress that Middleby has made. From addressing labor costs among commercial foodservice customers to improving margins at its Taylor commercial foodservice business and introducing new products at Viking, the CEO is excited about everything that's happening with Middleby.

Looking forward, Middleby remains optimistic. FitzGerald pointed to new product innovations for frozen beverage and dessert categories for commercial foodservice, accommodating the rise in demand for pet-food related food-processing equipment, and strategic moves to break into new businesses as driving future growth. In particular, the acquisitions of BKI and PowerHouse Dynamics will improve Middleby's presence in the retail- and convenience-store market, as well as adding cloud computing and Internet of Things capabilities. As technology becomes increasingly important, Middleby is working hard to make sure that the rest of the industry doesn't pass it by.

Middleby investors seemed reasonably comfortable with the news, although the stock price eased lower by between 1% and 2% in morning trading following the announcement. The kitchen-equipment specialist has had to put in considerable effort to find ways to turn around struggling parts of its business and track a course toward a better future -- but much of that work has already been done and Middleby now looks like it's reaping the rewards. If it can continue to build momentum with some of its most lucrative projects, then the future will look even brighter for Middleby.