Commercial equipment manufacturer Middleby (NASDAQ:MIDD) may not be the most logical investment in the middle of a pandemic that has closed restaurants around the nation -- but it's working out pretty well for investors today. Middleby shares are up a strong 16.3% at 3:40 p.m. EST after the company reported an earnings beat in the morning.

Instead of the $1.04 per share that analysts had predicted, Middleby reported profits of $1.10 per share. And instead of analysts' forecast of $601.2 million in sales, Middleby made $634.5 million. 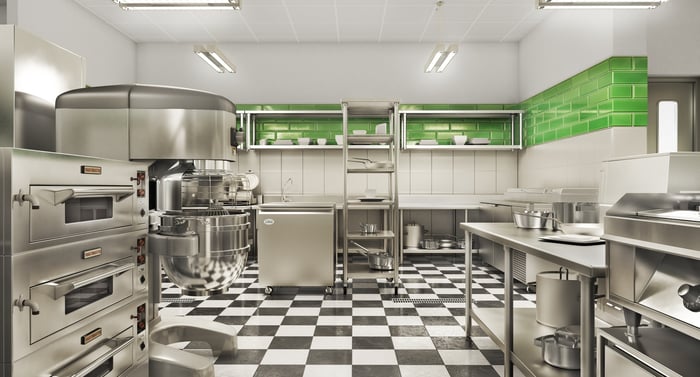 The news wasn't all good, of course. Middleby may have beaten Q3 sales estimates, but sales were still down more than 12% year over year. It may have beaten on earnings, too -- but those were down 25%.

Still, things could have been worse, and the fact that they weren't worse is a big reason Middleby shares are flying today. CEO Tim FitzGerald noted that "while the COVID-19 pandemic continues to have a major impact on our business, the quick and decisive actions we took earlier this year have strengthened our business and are reflected in the strong financial performance in the third quarter."

Will this strong performance continue into Q4 and beyond? Middleby didn't give any specific guidance on that score, but did note that "in commercial foodservice, orders have consistently improved since the initial impact of COVID-19 in the second quarter" and "the significant expansion of delivery, drive-thru, and curbside pick-up" business is helping keep retail restaurants afloat -- and Middleby's sales along with them. At the same time, Middleby's residential kitchen business is growing (sales up 14%) in reflection of consumers' "increased time spent at home and in the kitchen."

All that being said, most analysts who cover the company agree that Q4 is probably going to be another down quarter, with sales sinking perhaps 13% and profits down as much as 34%. Here's hoping that in Q4, the damage will be less extreme than that...just as it was in Q3.