Please ensure Javascript is enabled for purposes of website accessibility
Log In Help Join The Motley Fool
Free Article Join Over 1 Million Premium Members And Get More In-Depth Stock Guidance and Research
By Demitri Kalogeropoulos – May 8, 2019 at 1:26PM

The GPS device giant sees a record sales year ahead.

Garmin (GRMN -0.42%) this week announced first-quarter results that kept the business on track to meet management's 2019 outlook. Solid sales growth across most of the company's portfolio powered record revenue, although profitability dipped as spending increased and the GPS device giant sold a higher proportion of low-margin fitness trackers.

CEO Cliff Pemble and his team believe that the Q1 operating trends position the company well for the seasonally stronger second quarter, and that Garmin's pipeline of device launches will make for a robust holiday season to end the year. Executives detailed a few of their key conclusions on those business trends in a conference call with Wall Street analysts. Below are a few excerpts from that presentation. 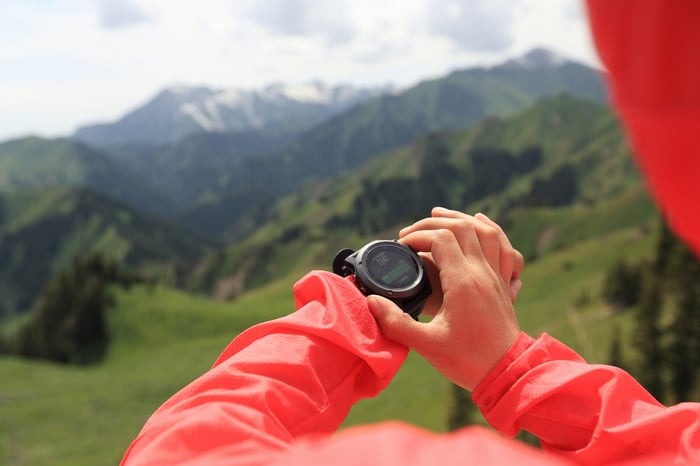 Consolidated revenue grew 8%, led by double-digit growth in both marine and aviation. Also, both the fitness and outdoor segments achieved solid growth during the quarter. On a combined basis, marine, aviation, fitness, and outdoor were up 12% compared to the prior quarter.
-– CFO Doug Boessen

Garmin's automotive division continued shrinking along with the broader market for stand-alone car navigation devices. But executives pointed out that their other four product niches collectively expanded at a double-digit rate. These segments also accounted for essentially all of the company's operating profit.

Management called out a few product highlights that drove healthy demand this quarter, including new sonars in the marine segment and popular aviation platforms. It's too early to tell about sales for consumer-targeted devices like the Marq sports watches and Forerunner running smartwatch, but Pemble said early interest has been encouraging.

About that profitability decline

Gross margin was 50% [in the fitness category] and operating margin was 10% in the quarter. Margins decreased due to a combination of factors including lower selling prices and a shift in mix as certain products in our consumer wellness categories experienced significant year-over-year growth.
-– Pemble

Garmin's earnings report contained two potential warning signs about shifting demand trends: lower gross profit margin and a spike in inventory levels. The profitability drop was driven by a weakening selling environment in the fitness category, which was mostly offset by better results elsewhere in the portfolio. Executives said that the fitness niche should see contracting margins for the full year, although future drops won't be as large as what investors saw this quarter.

As for the inventory increase, Garmin said it was simply the result of a buildup in preparation for upcoming product launches and the seasonally stronger second quarter.

We're encouraged by our first-quarter results ... [S]ince Q1 represents the lowest seasonal quarter of our financial year and much of the year remains ahead of us, we are maintaining the guidance issued in February.
-– Pemble

Garmin didn't raise its outlook even though first-quarter growth was significantly higher than the company has projected for the full year. That conservative forecast makes sense, considering so much of the fiscal year is yet to come. More importantly, a significant part of its sales and profits for the year will come from products that haven't yet reached retailers' shelves -– let alone been tested by customers.

As a result, investors will have to wait until at least the company's second-quarter report for a better reading on whether revenue will slow down from last year's 7% increase or whether Garmin will notch a fifth consecutive year of rising profitability.