Please ensure Javascript is enabled for purposes of website accessibility
Log In Help Join The Motley Fool
Free Article Join Over 1 Million Premium Members And Get More In-Depth Stock Guidance and Research
By Keith Speights – May 8, 2019 at 9:15PM

The biotech's revenue fell. But it still managed to beat the consensus Wall Street earnings estimate.

Sangamo Therapeutics (SGMO -1.79%) beat Wall Street estimates when it announced its fourth-quarter results in February. Revenue jumped by 105% year over year, and the biotech's net loss wasn't as bad as analysts expected.

Investors learned how Sangamo performed in the first quarter on Wednesday with the company providing a quarterly update after the market closed. How did the biotech fare? Here's what you need to know about Sangamo's Q1 results. 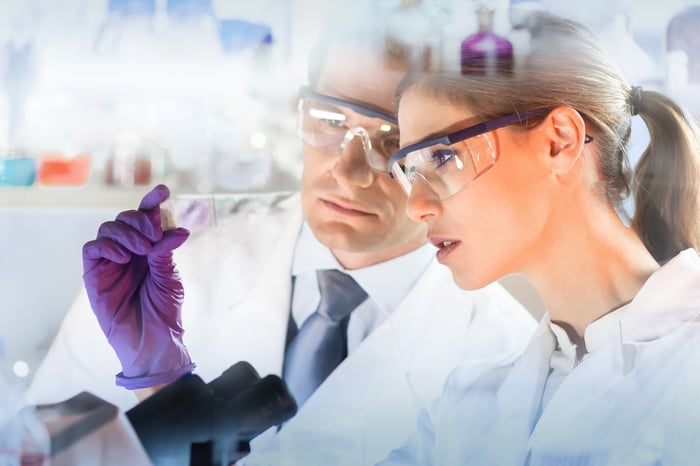 Sangamo's top-line performance went in the wrong direction in the first quarter. Revenue fell nearly 36% year over year to $8.1 million. The consensus analysts' estimate projected that the company's Q1 revenue would top $22.8 million.

Sangamo ended the first quarter with cash, cash equivalents, and short-term investments of $351.6 million. The company had $400.5 million on hand as of March 31.

The company still managed to slightly beat the consensus Wall Street bottom-line estimate, though, despite the falling revenue. Sangamo anticipated that operating expenses would increase. They did increase, but not as much as analysts expected. Operating expenses rose 55% year over year to $52 million. This increase was due to Sangamo's acquisition of TxCell, higher staffing to support its preclinical and clinical development programs, and manufacturing-related activities.

What these numbers don't reflect, however, was Sangamo's pipeline progress after the first quarter ended. In April, the company announced promising results from a phase 1/2 clinical study evaluating experimental gene therapy SB-525 in treating patients with severe hemophilia A. Sangamo is partnering with Pfizer on SB-525.

Sangoma expects that operating expenses for full-year 2019 will be between $210 million and $220 million. The company also projects that its current cash stockpile will carry it through the end of 2021.

With plenty of cash to fund operations, the main things for investors to watch will be Sangamo's clinical studies. The most important of these is the ongoing phase 1/2 study of SB-525. If all goes well, Sangamo and Pfizer could be headed toward a pivotal study of the experimental gene therapy.