Please ensure Javascript is enabled for purposes of website accessibility
Log In Help Join The Motley Fool
Free Article Join Over 1 Million Premium Members And Get More In-Depth Stock Guidance and Research
By Dan Caplinger - May 8, 2019 at 4:53PM

These stocks struggled on a mixed day on Wall Street.

The stock market attempted a rebound on Wednesday, with the Dow Jones Industrial Average ending in the green even as other major indexes saw modest losses. Investors tried to be a bit more optimistic about the state of trade talks between the U.S. and China, hoping that a favorable resolution to the long-standing dispute between the two trade partners could still be within reach. Some companies had negative news that sent their shares lower. Marathon Petroleum (MPC 2.63%), Livent (LTHM 14.21%), and Myriad Genetics (MYGN 9.31%) were among the worst performers. Here's why they did so poorly.

Shares of Marathon Petroleum fell 7% following the refining company's release of first-quarter financial information. Marathon said that it lost money for the quarter, with revenue that fell short of what investors had expected to see. In addition, the refinery specialist said that it would combine two of its midstream master limited partnerships into a single entity, simplifying the energy group's operations. Yet investors weren't prepared for a loss given the recovery in the energy markets during the quarter, and some fear that Marathon might be losing ground compared to its peers in the refinery space. 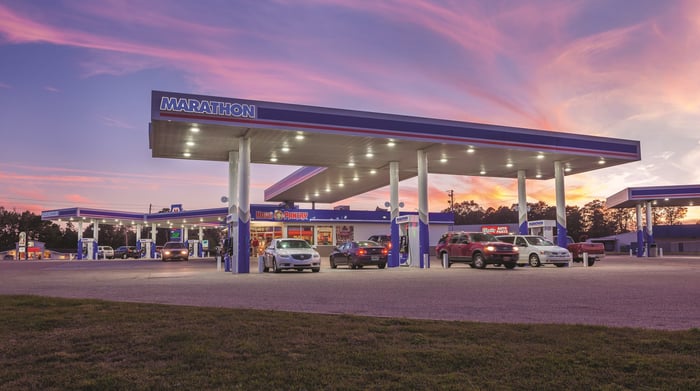 Livent saw its stock drop 16% after the lithium specialist dealt with falling demand for its primary products in the first quarter of 2019. The company's revenue for the quarter was about 5% less than most investors had expected to see, and in its outlook, Livent admitted that falling demand for the lithium hydroxide used in certain battery technology is likely to keep weighing on its results until at least the latter part of this year. The company also cut its guidance for the remainder of the year, raising new concerns about whether the customers that rely on Livent to supply them with lithium products might well cut back on their long-term business as well. Until that gets resolved and operations in the lithium-producing areas of Argentina return to full production, Livent could remain under pressure.

Finally, shares of Myriad Genetics plunged 21%. The gene-sequencing specialist's fiscal third-quarter financial report had some solid results in it, including an 18% rise in revenue and a 35% jump in adjusted earnings per share. Myriad said that its hereditary cancer and prenatal products helped give the company one of its most profitable quarters ever, and CEO Mark Capone sees new products playing an ever-increasing role in its future growth. Yet Myriad's earnings projections fell short of what investors had wanted to see for the full fiscal year. Given its big opportunities, shareholders want Myriad Genetics to grow as quickly as possible for the foreseeable future.