Please ensure Javascript is enabled for purposes of website accessibility
Log In Help Join The Motley Fool
Free Article Join Over 1 Million Premium Members And Get More In-Depth Stock Guidance and Research
By Lou Whiteman - Updated May 8, 2019 at 10:49AM

Current demand for lithium isn't as strong as the company had hoped.

Shares of Livent (LTHM -1.50%) fell by more than 22% on Wednesday morning after the lithium producer cut its full-year revenue and profit forecasts due to lower demand and weaker prices.

Livent is the onetime lithium business of agriculture chemicals vendor FMC Corp. that was spun off as an independent late last year. On Tuesday after market close, it reported first-quarter earnings of $0.12 per share on revenue of $98.3 million, matching expectations on profit but missing on revenue by more than $5 million. The company also warned it sees deteriorating demand that will impact the rest of the year. 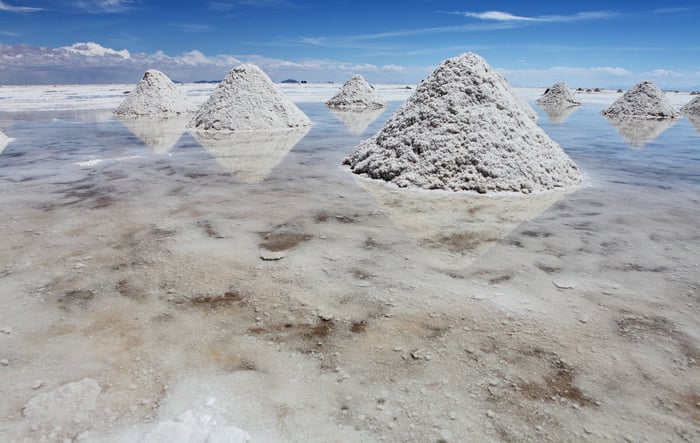 The company said it does not see demand for lithium hydroxide used in high-nickel cathode chemistries improving until late 2019 or early 2020, causing it to lower expectations for the year.

"We are seeing weaker near-term demand for our high-performance lithium hydroxide, as several major customers have informed us about recent decisions to delay their own commercial launches of high-nickel cathode chemistries," CEO Paul Graves said in a statement accompanying earnings.

The company also had to deal with almost three weeks of lost production during the quarter at its Argentina lithium facilities due to heavy rains.

Lithium has been a hot topic with investors in recent years, with demand for the metal soaring thanks to growing interest in electric vehicles (EVs). But concerns about increased capacity coming on line and the impact of reduced EV subsidies eating into pricing weighed on the sector in 2018, and Livent's results would suggest those worries were justified.

Graves insists the long-term trends still work in his company's favor, even if they won't fuel growth as quickly as some had hoped.

"Despite weaker current market conditions, the outlook for electric vehicles and lithium demand remains positive," Graves said, noting that multiple automakers are moving forward with new EV model launches. "Importantly, for the first time, they are now specifying performance requirements that will require the use of high-nickel cathode chemistries, which increases our confidence in the growing importance of high-performance lithium hydroxide."