Please ensure Javascript is enabled for purposes of website accessibility
Log In Help Join The Motley Fool
Free Article Join Over 1 Million Premium Members And Get More In-Depth Stock Guidance and Research
By Billy Duberstein - Updated May 9, 2019 at 5:39PM

Now may be a good time to look at the world’s leading alternative asset manager.

While we mostly discuss stocks here at The Motley Fool, there are other classes of investments, such as private equity funds, real estate funds, hedge funds, and distressed debt. These types of funds are run by alternative asset managers, the biggest of which is Blackstone (BX).

Being a partnership comes with some drawbacks, though, as investors must deal with cumbersome Schedule K-1 tax forms. In addition, many index funds, ETFs, and mutual funds can't own these partnerships as a rule, and many alternative asset managers have long blamed this for the undervaluation of their stocks.

However, in light of the recent Tax Cuts and Jobs Act of 2017, several of these firms have elected to switch to become "regular" C corporations. Ares Management (ARES -1.85%) was the first firm to go ahead with the change, followed by KKR (KKR -1.22%) in 2018.

Blackstone was the notable holdout, and the clear leader in the space; however, on its recent earnings release and conference call, CEO Steve Schwartzman announced it would finally be switching to a C-corp. structure. Here's why, and why it could be very good news for Blackstone investors.

Make no mistake, there's a reason why these firms initially chose to be partnerships. Partnerships eschew most corporate taxes, so by making this move Blackstone's corporate tax rate will increase from around 11-13%, gradually rising into the low 20s according to management. Before the Tax Cuts and Jobs Act, Blackstone's rate would have likely been closer to the previous 35% corporate tax rate if had become a corporation.

So why would management switch? A couple reasons. One, high earners were likely paying significant taxes on the distributed income anyway. Distributions are taxed as regular income, which is taxed at 37% for the top bracket. Blackstone's new dividends will be taxed at the 15% tax rate on qualified dividends (20% for those earning over $425,000). So while the corporate tax will go up for Blackstone, the dividends will be taxed a bit lower, mitigating some of the effect for Blackstone shareholders.

Many can now own Blackstone

Blackstone perhaps had the confidence to make the jump after seeing positive reactions from investors of Ares and KKR. Both stocks performed well after the switch, and both doubled both their institutional ownership and trading volumes.

"If we continue to grow, as the reference institution in our industry and now have access to trillions of dollars more buying power, I think, it's reasonable to assume, we should substantially close the gap between our valuation and that of other top companies."

It's pretty clear that Schwartzman thinks Blackstone is substantially undervalued due to these trading hangups. Is he right? 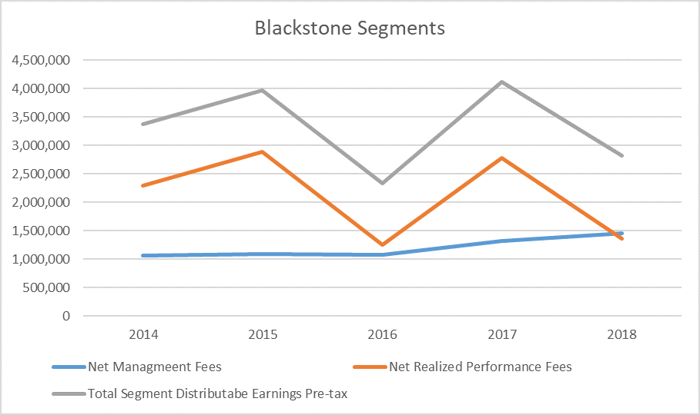 Blackstone has steadily grown assets under management, increasing its AUM sixfold since its IPO in 2007. Over just the past four years, Blackstone has grown its AUM from $290 billion to the $512 billion it sits at currently.

The steadier "core" net management fees have been growing at roughly an 8% average growth rate over the past four years, though AUM has grown an even higher 13% in that time. That's partly due to the divestment of Blackstone's investment banking arm PJT Partners (PJT 1.10%) in 2015, which dinged growth in 2016. Going forward, I think management fees will more closely mirror AUM growth. Meanwhile, net realizations have bounced around, averaging a bit over $2 billion per year.

Blackstone currently trades at a roughly $44.5 billion market capitalization, with trailing-12-month distributable earnings (pre-tax) of $2.86 billion for roughly a 15.5 multiple on pre-tax earnings. That's not expensive, though not as cheap as, say, some of the larger banks.

However, it could be argued that the company's management fees are relatively safe and "recurring," as they are mostly tied to assets raised with no incremental capital expense. Blackstone trades at about 30 times these pre-tax management fee earnings, which could grow in the high single-digits to low double-digits going forward. In this low-rate environment, one could make the argument Blackstone is fairly valued based on the management fee stream alone, with the performance-based realizations thrown in for free.

July 1 is the day

Blackstone won't officially become a corporation until July 1. Still, the stock was given a lift on the news -- though that was also the same day as earnings.

Blackstone has vowed to keep its dividend high, paying out a large portion of earnings even after the switch, though that dividend will bounce around based on performance fees. But don't let inconsistency stop you. Blackstone is a high-quality dividend name that should weather (or take advantage of) any economic downturn, and while the stock has performed well recently, I think it can still go higher. I'm holding through the conversion, and others may want to initiate a position ahead of the switch.