Please ensure Javascript is enabled for purposes of website accessibility
Log In Help Join The Motley Fool
Free Article Join Over 1 Million Premium Members And Get More In-Depth Stock Guidance and Research
By Rich Smith – May 9, 2019 at 1:27PM

Yes, AMC lost money. And no, AMC is not closing its Stubs A-List movie subscription service.

Shares of cinema magnate AMC Entertainment (AMC -7.04%) dropped 11% in early trading Thursday after the company posted much weaker than expected earnings (i.e. much greater than expected losses). AMC stock is still down 8.8% as of 1:15 p.m. EDT.

Analysts were already expecting to see AMC post a loss for the quarter -- $0.51 per share. What surprised them was that, in fact, AMC reported a loss of $1.25 per share ($1.21 pro forma ), despite hitting estimated revenue of $1.2 billion on the nose.

Recapping the results, AMC CEO Adam Aron said today's numbers made him feel "quite bullish about the full year prospects for AMC." And yet, sales declined 13% year over year, and AMC's $1.25 per-share loss was much worse than the $0.14 per-share profit it reported one year ago. 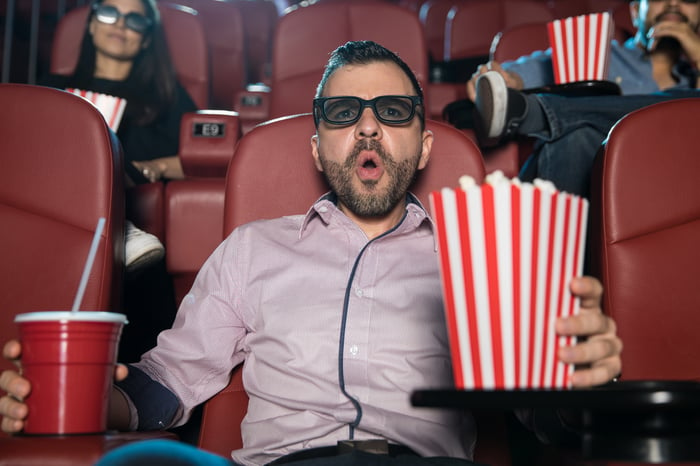 How to explain this seemingly strange reaction to a money-losing quarter? "We have high expectations for 2019, due to an extraordinary slate of movies coming, the timing of releases within the film slate suggests that it will be a back-end loaded year," said Aron.

Of course, the big question investors have today is what the future holds for AMC's Stubs A-List movie subscription service, now that competitors MoviePass and Sinemia appear to be at death's door.

A-List "has already attracted more than 785,000 subscribers, far in excess of initial internal expectations," reports AMC. Between this success, AMC's assertion that the service is producing "incremental profitability" for it, and the company's apparent ability to raise prices (up 10% in five states where the service is running, and up 20% in five more states), chances look good that A-List is here to stay -- whatever happens to MoviePass.