Please ensure Javascript is enabled for purposes of website accessibility
Log In Help Join The Motley Fool
Free Article Join Over 1 Million Premium Members And Get More In-Depth Stock Guidance and Research
By Rich Duprey – May 10, 2019 at 7:50PM

India-based rival Jawa is off to a fast start with its new low-cost motorcycles.

It's been 20 years or more since anyone was put on a waiting list to buy a new Harley-Davidson (HOG -2.71%) motorcycle, but the bike maker hopes to recapture some of that faded glory by building international sales to the point that they account for half of its total volume.

One of the primary routes Harley intends to take is straight through India, the world's largest motorcycle market, with many of the new smaller models it plans on building being introduced there first. That road, however, may contain some major potholes. 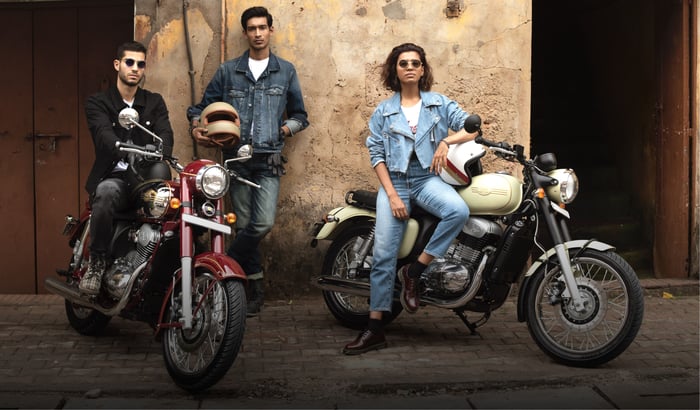 A tsunami of demand

Indian auto giant Mahindra & Mahindra (MAHMF -9.96%) announced late last year that it was resurrecting the Jawa motorcycle brand, once one of the most popular brands in the country that closed down due to financial difficulties. Two smaller bikes, the Jawa and the Jawa Forty Two, would be outfitted with 300-cubic-centimeter engines, while the larger Perak would come with a 334 cc engine.

By Christmas, though, Mahindra was forced to close online bookings for the Jawas because demand was so massive that they were sold out till September 2019. While it was still taking orders for the bikes at the network of dealerships Mahindra created, by January, the backlog had swelled to such a level that deliveries were pushed back till November.

That forced Mahindra to push back production of the Perak until September so it could focus on filling orders for the other two models, and it doesn't expect deliveries of the Perak to begin until early 2020.

Late to the game

It's a nice problem for Mahindra to have, but it creates a new one for Harley-Davidson. The latter's own new models, which are expected to have engine displacements between 250 cc and 500 cc, won't be introduced into the Indian market until sometime next year at the earliest.

When it announced its More Roads to Harley initiative last summer, the company anticipated having several new, smaller motorcycles to introduce to the market, with India being among the first to receive them. It told Reuters at the time, though, that it was also looking for a partner to help manufacture the bike: "We realize that we as a company have been very focused on large heavyweight motorcycles and our expertise in the 250-500 cc space needs to grow. We are looking for a strategic alliance that can help us grow through understanding the product, understanding the consumer, understanding the assembly."

That suggests that even though Harley has an assembly plant in India, it might not actually use it to make the new motorcycles for the Indian market. The Indian plant is currently used to manufacture its Street 750 model for sales outside of the U.S., but Streets faced a massive recall last quarter due to faulty brakes, and Harley sold very few of the bikes at all.

That this is occurring as Jawa is swamping the market with its new, low-cost bikes is not a good sign. Jawa may even be having an impact on Royal Enfield, India's largest bike manufacturer, which has a 90% market share. In the third quarter, its parent company Eicher Motors said it suffered a 6% decline in volume, selling 8,865 fewer bikes in the period (in comparison, Harley sold only 3,400 motorcycles for the whole year).

Although Eicher blamed increased insurance requirements, rising raw material costs, and price hikes for the decline, most of the drop it experienced in the last three months of 2018 came from its bikes with engine displacements under 350 cc. More than 90% of the bikes Eicher makes are in that category, and they accounted for a like percentage of the decline.

It may be coincidental with the Jawa launch, but arriving so late to the market and having to go up against two larger competitors while coming off a disastrous recall is going to make it difficult for Harley-Davidson to gain traction.

While the backlog in Jawas might have been an opportunity for Harley-Davidson to pick up some customers, by the time Harley enters the market, it's likely the bottleneck will be resolved. Moreover, Harley's penchant for pricing its motorcycles at a premium is going to limit their acceptance when buyers are showing they want inexpensive bikes.

Expanding its global presence is a worthwhile goal for Harley-Davidson, but as has been clear from the outset, it's not going to be an easy one to achieve and certainly isn't a panacea for what ails the company.