Please ensure Javascript is enabled for purposes of website accessibility
Log In Help Join The Motley Fool
Free Article Join Over 1 Million Premium Members And Get More In-Depth Stock Guidance and Research
By Daniel Miller – Updated May 10, 2019 at 1:07PM

Shares of TrueCar (TRUE -1.86%), an online automotive marketplace providing pricing transparency and connecting consumers with certified dealers near them, opened trading Friday 22% lower from the prior day's close after the company issued its first-quarter results. The stock is down 13.3% as of 1 p.m. EDT.

First-quarter revenue increased 5.6% compared to the prior year, to $85.6 million, which was slightly better than analysts' estimates. On the bottom line, a loss of $0.14 per share was wider than analysts' estimates of a $0.10 loss per share. When adjusted for one-time items, TrueCar's EPS was roughly breakeven, which topped analysts projections for adjusted EPS loss of a penny. Management also lowered its full-year 2019 outlook, with revenue now expected to be in the range of $361 million to $375 million and adjusted EBITDA to land between $27 million and $36 million. Guidance issued during the fourth quarter of 2018 was already cautious, with estimates for revenue between $371 million and $378 million, and adjusted EBITDA of $35 million to $40 million. 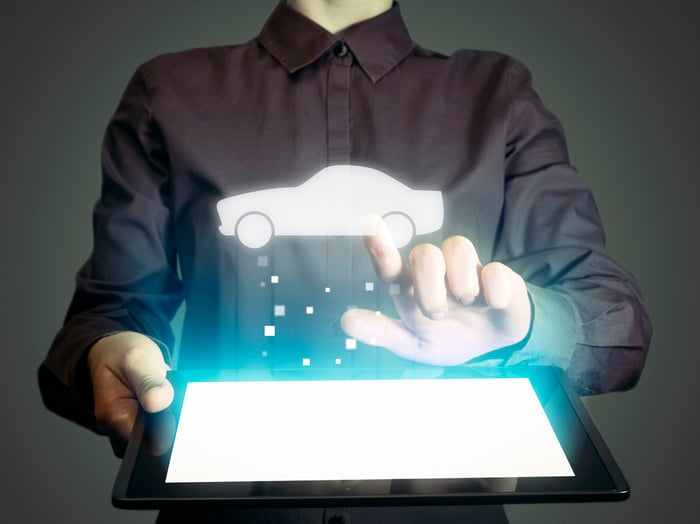 "Despite our revised outlook for the remainder of the year, we remain enthusiastic about the tremendous amount of innovation going on across the Company," said Chip Perry, TrueCar's president and chief executive officer, in a press release. "We continue to make significant progress on product improvements, empowered by the completion of Capsela [TrueCar's new technology platform], that are designed to enhance the consumer experience, increase engagement, and fuel future revenue growth."

Looking past the estimates, standard earnings metrics, and revised guidance, there were other red flags for investors to note. TrueCar's average monthly unique visitors checked in at 7.1 million, which was the second-lowest figure since the fourth quarter of 2016 -- the only lower result in between those two reports was the fourth quarter of 2018. Furthermore, TrueCar's adjusted EBITDA margin continued its sequential decline, from 10.7% during the third quarter of 2018, down to 9.6% during in Q4 2018, and hitting 5.9% during Q1 2019. TrueCar has shed roughly 31% of its value year to date, and management has a lot of work to do if that is to reverse over the next year.

Expect More Pain for TrueCar After Its CEO Departs