Please ensure Javascript is enabled for purposes of website accessibility
Log In Help Join The Motley Fool
Free Article Join Over 1 Million Premium Members And Get More In-Depth Stock Guidance and Research
By Danny Vena – May 10, 2019 at 3:38PM

The streaming giant takes another small step towards greater transparency regarding its viewer metrics.

Streaming-leader Netflix (NFLX -4.49%) has been consistently secretive about the popularity (or lack thereof) of its programming. This is in stark contrast to broadcast or cable shows that make money from advertising and release viewership data to prove their worth. That may be changing.

Over the past several earnings-report releases, Netflix has been doling out selective metrics about the popularity of some of its programs. The company even signaled on a recent conference call that it would begin to be more transparent. 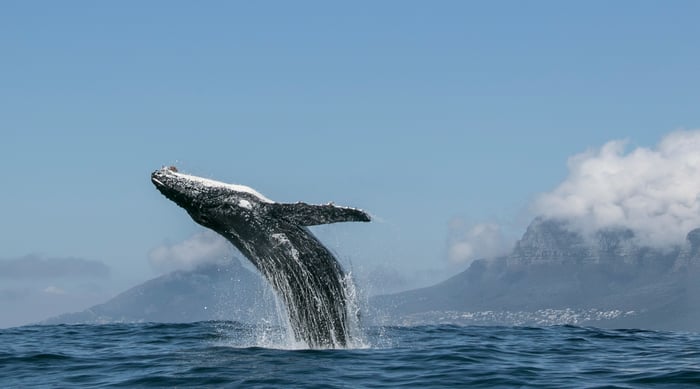 A humpback whale breaching in a scene from Netflix original series Our Planet. Image source: Netflix.

In a tweet on Thursday, Netflix UK and Ireland released a number of Top 10 lists regarding its most-popular programming, including the Overall Top 10 most-watched programs in the U.K. during April:

We want to help you find as much ~great stuff~ to watch on Netflix as possible. So here's a look at the top ten most-watched shows and films in the UK in April 👀

The company also provided Top 10 most-watched lists for films, series, documentaries, reality shows, and non-English-language shows in the U.K. Netflix also said it would begin releasing weekly lists to that audience beginning next week. In order to compile them, Netflix said: "We look at the most-watched individual season of a show, film or special (regardless of when it launched). 'Watched' means members finished at least 70% of one episode."

The streaming giant also indicated that the move was a test and wanted to be sure the information was useful -- meaning the format or the lists are subject to change or may be discontinued. There's no official word from Netflix yet about whether the company will be following up with U.S. viewer metrics, though that's likely in the works.

It's important to note that the company hasn't provided any concrete numbers to back up the lists, so this is more of a variation on what Netflix already provides via the "Trending" category on its website.

The first indicator of Netflix's evolving strategy came last year when it said in its third-quarter 2018 shareholder letter, "More than 80 million accounts have watched one or more of the Summer of Love films globally." That increasing openness continued in December when Netflix famously tweeted, "Took off my blindfold this morning to discover that 45,037,125 Netflix accounts have already watched Bird Box -- best first seven days ever for a Netflix film!" With more than 137 million subscribers worldwide at the time, that equated to nearly one-third of the company's viewers watching the program in its first week of release.

Netflix followed that up in its Q4 earnings release with a host of viewership metrics about some of its most popular shows. The company disclosed that 80 million member households had watched Bird Box in its first four weeks on Netflix, You was watched by 40 million households in the same time frame, and Sex Education was "tracking" toward 40 million.

This trend continued in the first quarter, when Netflix revealed that its series Umbrella Academy was watched by 45 million member households and original movie Triple Frontier was viewed by 52 million, both within the first four weeks of release on the platform.

During Netflix's earnings conference call in April, an analyst noted that, for the second quarter running, the company had released a lot more information about the viewership of its programs. Netflix Chief Content Officer Ted Sarandos addressed the changes:

We're trying to get to a place where we could be a lot more transparent, both with our producers and with our customers. ... Over the next several months, we're going to be rolling out more specific granular data reporting first to our producers and then to our members and of course to the press over time and be more fully transparent about what people are watching on Netflix around the world.

A number of outside companies have previously made attempts to quantify how many viewers have watched Netflix's programming, but each report has been rebuked by the company.

At the same time, detractors are quick to point out that the numbers Netflix is reporting are provided without context (breakdown by country or territory, or domestic vs. international, for instance). They also complain the company is providing these figures without independent verification, which casts doubt on the veracity of the metrics.

Since the platform is ad-free, there really isn't any need for Netflix to provide too much detail, and the company maintains a competitive advantage by not letting its rivals know too much. However, by increasing the amount of information it provides to producers -- who really want to know how their programs are performing -- Netflix gains a significant bargaining chip in its efforts to attract content creators. The rest is just a nice tool for viewers.