Please ensure Javascript is enabled for purposes of website accessibility
Log In Help Join The Motley Fool
Free Article Join Over 1 Million Premium Members And Get More In-Depth Stock Guidance and Research
By John Ballard – May 11, 2019 at 8:00AM

Activision bagged the king of beers as the newest sponsor for "Overwatch League."

The maker of Call of Duty reported its latest quarterly results last week. While investors were disappointed with Activision Blizzard's (ATVI -0.83%) outlook for 2019, the quarter's adjusted revenue and earnings came in above management's expectations. There were still signs of weakness in player engagement, but the quarter wasn't all bad news.

One of the bright spots was on the esports front. Making video games into a professional spectator sport is a major growth initiative for the company. Overwatch is a "tentpole" franchise for Activision Blizzard, and while the game experienced some weakness in player engagement, the esports Overwatch League enjoyed tremendous momentum in the first quarter. 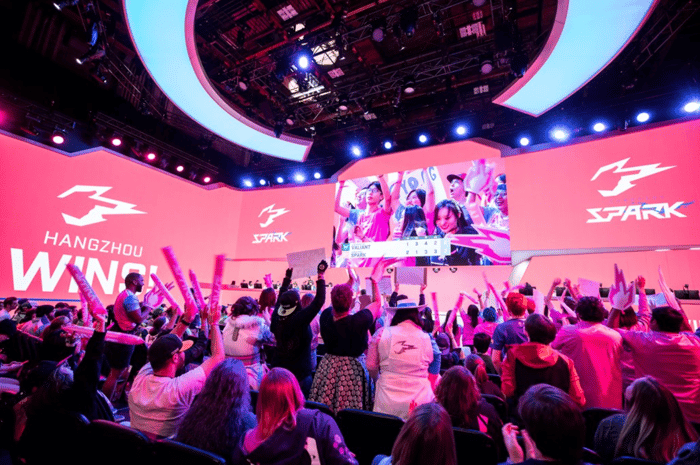 Two global brands are on board

Overwatch experienced a sequential decline in monthly active users during the first quarter, even though the franchise is enjoying momentum on the esports stage.

Activision added Anheuser Busch Inbev to go along with Coca-Cola and State Farm as the three top sponsors of Overwatch League's second season. The league enjoyed a 30% increase year over year in total hours viewed during the first quarter. This highlights an interesting dichotomy occurring between engagement in the game and interest in watching professionals play the game in the Overwatch League.

If viewership for Overwatch League is going up while the number of players spending time in the game has dipped, this means one of two things: (1) a higher percentage of the existing player base is watching league matches compared to last year, or (2) the league is attracting new viewers who don't play Overwatch. It might be a combination of both.

Either way, this is a positive for Activision, because it indicates the company doesn't necessarily need to see booming engagement in the game to see strong growth in esports. This is what investors should want to see. It's on more parallel to traditional sports where millions of people watch without playing themselves.

Activision CEO Bobby Kotick noted that esports is helping create "a lot more enduring appeal in these franchises."  Kotick also hit on what esports is ultimately all about -- growing the value of the company:

We've seen a tremendous opportunity to create value for our shareholders through our esports ambitions. ... If you think about the last couple of years, the result that our team focused on esports has achieved is remarkable. If you look at the amount of time it would've taken in traditional sports to sell over $0.5 billion worth of teams, I don't think there's any example of being able to do that in a couple of year period of time.

You read that right. Activision Blizzard has taken in $500 million in revenue by selling more than 25 Overwatch League and Call of Duty teams. And that doesn't include broadcast rights and sponsorships. More importantly, the investment of global brands like Coke and Bud lay a solid foundation for future advertising growth.

The company is already moving forward with plans to launch a city-based esports league for Call of Duty. With its quarterly earnings report, Activision announced the sale of the first five teams, all to current Overwatch League owners, which means those owners are likely very satisfied with their investment in Overwatch League so far -- another good sign for Activision shareholders.

The company still expects 2019 revenue to be $6.3 billion on an adjusted basis, which is down from $7.3 billion in 2018. This is a year of transition as the company shifts resources around and bulks up its development staff to increase the frequency of content releases in the short term. But management mentioned that its guidance assumes no material revenue from team sales for Call of Duty, in addition to no material profit from its mobile initiatives. So, consistent with its history, management may be playing the under-promise/over-deliver game.

With Activision Blizzard enjoying tremendous momentum in esports, and with management directing investment toward mobile games and content development, the company should return to growth in 2020. New content is expected to release for Overwatch in the coming months, so investors should watch for engagement trends within this crucial franchise in the coming quarters, as that will give a clue as to whether management's transition plan is working.