Expectations were muted for Wendy's (NASDAQ:WEN) first-quarter 2019 earnings because the quick-service chain was facing strong comparisons from last year when it added the Double Stack burger to its dollar menu to drive traffic in February 2018.

Yet the burger joint still posted some fairly solid numbers for the period, and though it faces headwinds in trying to drum up guest counts to its restaurants, it believes it has a strong start to pushing up profits in 2019. 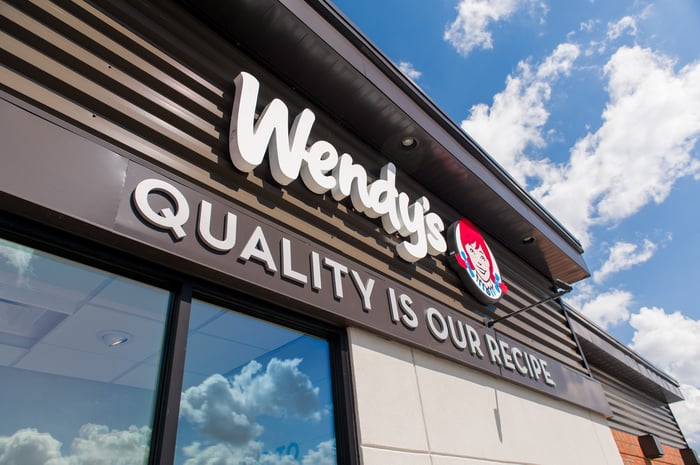 A four-point plan for growth

As first-quarter results released May 8 revealed, Wendy's revenue rose 7.4% year over year to $408.6 million, beating analysts' forecasts of almost $400 million, while earnings jumped 27% to $0.14 per share, ahead of the consensus estimate of $0.12 per share.

Wendy's essentially has a four-step plan to achieve its revenue and profit goals:

Executing this plan paid off in the first quarter, as North American comps rose on a one- and two-year basis, enough to offset a decline overseas. Despite going up against tough prior-year comparisons, new menu innovations including the Biggie Bag, the Giant Jr. Bacon Cheeseburger, and the Made to Crave hamburger line helped increase the chain's profitability.

Each playing off the other

The company is widely known for its "4 for $4" combo promotion, but was able to improve profits by creeping the pricing up to $5 with the Biggie Bag, which is the Double Stack burger (with the addition of cheese and bacon), chicken nuggets, a small fry, and drink. It's still a value, but Wendy's earns a lot more on that extra dollar, which also increases the average check size.

Similarly, the Jr. Bacon Cheeseburger is now included with chicken nuggets, fries, and a drink as a $5 menu package, but the new combo came at the end of the quarter, so its impact was negligible for the period. However, it will be around to drive traffic and profits in the second quarter.

The combination of new menu items, however, allowed Wendy's to grow company restaurant margins by 110 basis points as management's strategy of "one more visit, one more dollar" drove a positive sales mix in the quarter.

The company also opened 43 new restaurants globally -- up from 33 a year ago -- while new technological improvements allowed it to expand delivery to 75% of its restaurants in North America. Wendy's expects 80% of its footprint to be covered by delivery by the end of the year. Because awareness of its delivery option through DoorDash is still very low, though, management views this as a big growth opportunity, particularly as delivery has increased customer satisfaction scores.

Wendy's is also integrating delivery into its mobile app and it anticipates having three-quarters of its restaurants on mobile ordering by the end of the year, along with digital scanning kiosks inside its restaurants.

Still not coming through the doors

The problem is that Wendy's isn't generating more customer traffic, as it experienced headwinds in customer visits in the first quarter. Previously, the company enjoyed 13 straight quarters in which traffic grew or was at least flat. Facing slimmer traffic, Wendy's is looking at 2019 as an opportunity to boost profitability by improving the product mix and upselling customers.

President and CEO Todd Penegor said, "So we've brought a lot of folks in, now we've got to continue to trade folks up and that's healthy for our margin. And [we'll try to] trade folks up into some of our best offerings on our menu."

Yet Wendy's isn't alone in the traffic problem, as McDonald's is also suffering from declining guest counts, as is much of the quick-serve space. According to industry analysts at TDn2K, "As a whole, restaurants have been relying on their guests to spend more than they did a year ago as a key to increasing their same-store sales." Restaurant industry comps were up less than 1% for the first three months of 2019, but traffic was down over 2%.

Wendy's believes the customers will eventually come, with Penegor saying all it needs to do is "just continue to deliver on great-tasting food in a great-looking restaurant with a greater service experience."

The company has started the year with a strong step in that direction, one which strengthened its bottom line. So far, it seems that it ought to continue this momentum through the second quarter and beyond.