McDonald's (NYSE:MCD) first-quarter earnings showed customers are willing to pay more or buy more -- but there are still fewer of them actually going to its restaurants.

The burger king reported strong comparable sales growth in the U.S. and around the globe because it introduced new, higher-priced items while raising prices on others. However, domestic guest traffic counts continue to fall, indicating McDonald's hasn't yet fixed the problem that's plagued it for the past few quarters. 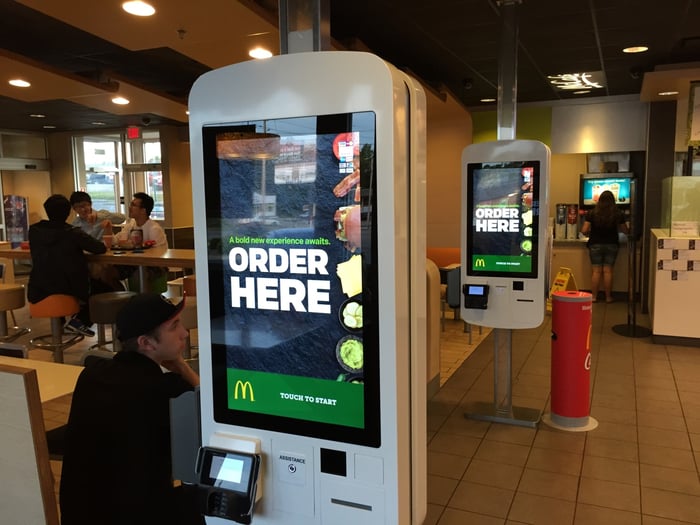 McDonald's has implemented a number of initiatives over the years that are starting to pay off, most notably its technology investments in its mobile app, self-order kiosks, and more recently digital signage.

For example, when people order their own food through a kiosk, they tend to add more items to their order than if an employee took it at a register. CEO Steve Easterbrook says, "We've created an ecosystem that more and more of our customers are using to order, pay, and receive" their food, one which it intends to build on with the recent acquisition of artificial intelligence outfit Dynamic Yield.

Through machine learning, the technology systems McDonald's is installing will use data collected from its millions of customers served daily to make meal suggestions based on factors like time of day, weather, or menu items that are trending. It's now being used at 700 drive-thrus, but will eventually be implemented across all of the chain's digital platforms.

Product innovation is also helping to drive customer purchases. Easterbrook and CFO Kevin Ozan pointed to new food items, like this quarter's Bacon Event and the 2-for-$5 Mix and Match deal, saying such items were helpful in boosting comparable sales, even sending them higher in foreign markets, too.

Bacon seemed to be the unifying thread worldwide as Canada, France, the U.K., and even Russia enjoyed higher comps. As strong as same-restaurant sales were in the U.S. this quarter, they jumped 6% in international markets.

What makes an item like bacon especially beneficial is that it is not a new item franchisees need to buy, but rather one they already have on hand and know how to cook --  and it gives restaurants an extra boost to sales and guest checks. Easterbrook told analysts, "When you can start to use ingredients we already have in our restaurants, our menu items our current managers are very familiar with preparing, it really is a seamless activity."

McDonald's has been on a simplification kick lately, streamlining its menu and making its offerings overall less complicated. It eliminated eight items from the late-night menu and did away with its premium Signature Crafted burgers, and the change may also explain why McDonald's has yet to jump on the fake-meat bandwagon.

Carl's Jr., White Castle, and Red Robin Gourmet Burgers are currently serving burgers made with a plant-based meat alternative, as is Burger King, which tried it out in a few dozen St. Louis-area stores. It apparently went so well that Restaurant Brands International said it will introduce them to all of its 7,300 stores later this year.

McDonald's is weighing whether fake meat is a fad or a sustainable trend, and whether it will add new complexity to its menu. Yet it sounds like we will see a fake meat Big Mac eventually, as Easterbrook acknowledged it was being talked about, and concluded, "So maybe more to come, but nothing much to say about in the moment."

Overall, McDonald's first-quarter report was much of what investors have come to expect from the chain, albeit with a higher comp sales kicker this time around. While revenue fell 3.6% to $4.96 billion (but up 2% in constant currency), that was the result of McDonald's refranchising efforts of selling company-owned restaurants to franchisees. Even so, it was ahead of Wall Street's expectations of $4.93 billion. Similarly, adjusted earnings of $1.78 per share were down from $1.79 a year ago, but they beat estimates of $1.76 per share.

Easterbrook is keeping McDonald's on an even keel, playing to its strength of giving customers a good, tasty meal at a good price, but using innovation and technology to boost sales. By taking care of the basics, the company should see customer traffic grow again.