Shopify (NYSE:SHOP) recently reported its 2019 first-quarter results, sending shares soaring; they're now up more than 90% year to date. The company's revenue rose to $320.5 million, a 50% increase year over year, and adjusted earnings per share (EPS) more than doubled to $0.09.

Revenue from the compay's "subscription solutions" segment, the high-gross-margin recurring fees that merchants pay for access to Shopify's e-commerce platform, grew 40% to $140.5 million. Revenue from "merchant solutions", the growing set of tools that Shopify provides to sellers, rose even faster, shooting up 58% to $180 million.

While there were a lot of numbers to like in the earnings report, the company's monthly recurring revenue (MRR) and Shopify Plus revenue numbers stood out the most.

Monthly recurring revenue, calculated by multiplying the number of Shopify merchants by the cost of the average monthly subscription plan, rose to $44.2 million, a 36% increase year over year. More than a quarter of this revenue came from Shopify Plus subscriptions, Shopify's premium plan, which saw revenue increase 61% to $11.3 million. 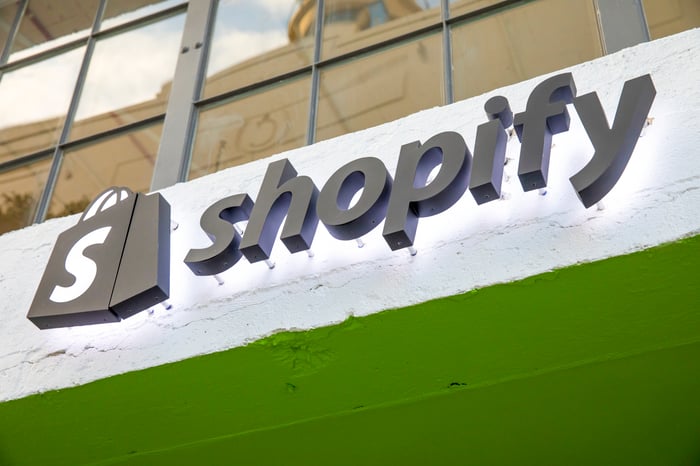 What is Shopify Plus?

The Shopify Plus subscription plan, according to the company's annual SEC filing, "was created to accommodate larger merchants, with additional functionality, scalability and support requirements."  Shopify even employs a salesforce -- which it doesn't do for its other services -- to drive adoption of Plus memberships.

Shopify Plus comes with greater capabilities than more basic Shopify plans and makes it easier for merchants to scale and customize their online storefronts. Shopify is also continuously working to add more features to its Plus plan, so that choosing Plus is a clear value proposition for larger sellers.

For instance, this quarter, the company introduced a new multicurrency feature for Shopify Plus sellers, allowing them to sell in multiple currencies but get paid in their local currency, a feature that should make it easier for merchants to make cross-border transactions.

Meet the Shopify Plus customers

Shopify says Plus customers come from both the ranks of existing customers who outgrow their current Shopify subscription and from those who are new to what the company has to offer.

As usual, we are seeing a majority of the new adds to Plus come from [merchants] new to the platform. That being said, it is really important that merchants that are doing really well on Shopify do upgrade to Plus and we have a process and a team in place to ensure that happens. But more than half of the new adds to Plus in this quarter came new to the platform, which is really exciting for us.

These new customers include large consumer packaged goods conglomerates launching brand-specific online stores, such as Johnson & Johnson and Procter & Gamble, and companies selling products direct to consumers for the first time, such as Hasbro and Levi Strauss & Co. There are also celebrities, such as Tom Brady and Reese Witherspoon, who have both launched their own stores on Shopify Plus' platform.

The importance of Shopify Plus

Shopify's MRR is used by management as "a directional indicator of subscription solutions revenue going forward." Subscription solutions revenue is the subscription price customers pay every month to have their online store hosted on Shopify's platform. It is much more profitable than the merchant solutions segment and is fairly predictable, as most sellers do not leave Shopify's platform. Of this high-margin revenue segment, Shopify Plus represents a small, but growing, part.

Yet it is easy to see why the growth of this segment is so important. These customers can be huge, representing much higher revenue streams than entrepreneurs or smaller online shops. If Shopify can become the go-to platform for large and small businesses to sell online -- and its growth seems to indicate that it could very well become exactly that -- its total addressable market is enormous, giving it the scale and reach that, say, Amazon.com can offer sellers, but as the seller's ally, not potential competitor.

A common mistake investors make is to think they've missed out after a stock jumps. It's easy to see why investors might think that about Shopify as, over the past 12 months, shares have almost doubled, and over the past three years, the stock price is up more than 750%. But even with that incredible growth and Shopify's rich valuation, I don't think this ride is over. With a market cap of about $30 billion, the company is still small compared to what it could become, an e-commerce operating system that enables sellers to sell goods and services online cheaply and quickly.

I don't think this company is done winning.