On Saturday, April 20, something bad happened to SpaceX's Crew Dragon spaceship. We still don't know exactly what happened. But at least we now know more than we did last month.

Eyewitness accounts at the time of the event referred to "smoke" seen over the Florida coast. NASA and SpaceX released statements referring to an "anomaly." News outlets reported an explosion. Eventually, a leaked video of the incident showed the SpaceX Crew Dragon spaceship on its test stand suddenly erupting into a ball of flame.

Initially, SpaceX and NASA declined to give much information on the anomaly, the smoke, or especially the explosion. But ultimately, that leaked video must have persuaded SpaceX and NASA to tear the bandage off and confirm what many already expected: Crew Dragon blew up. 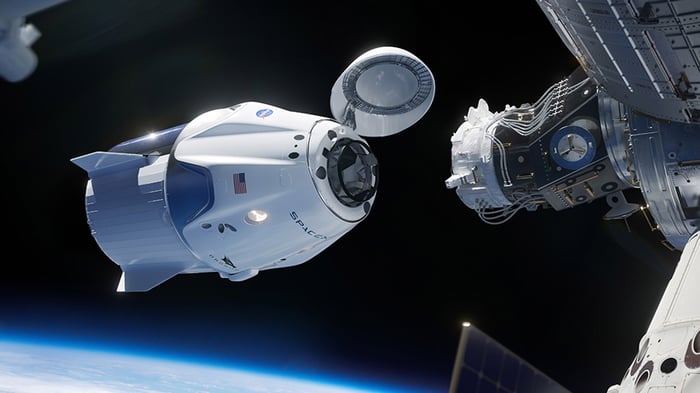 It's hard to argue with a video

In a public statement  last week, SpaceX vice president of mission assurance Hans Koenigsmann described how, while situated on a test stand in Florida, Crew Dragon had successfully test-fired its Draco maneuvering thrusters twice. It was just preparing to fire its Super Draco  thrusters (which, in the event of a mishap with the spaceship's rocket booster, would be used to safely propel the spaceship and its crew away from the explosion), when all of a sudden, "there was an anomaly and the vehicle was destroyed."

Now even Koenigsmann's statement repeated the party line that it was "too early to confirm" what exactly happened. Still, here's what we know that's important for investors.

The spaceship that blew up last month was the same vessel  that successfully completed an unmanned docking with the International Space Station in March. This spaceship, as you will recall, splashed down at sea after completing its mission -- so it's possible April's accident had something to do with wear and tear (and seawater) on the vessel, and not a fault in the spacecraft's initial design.

SpaceX was planning to reuse this particular spaceship to conduct an "in-flight abort test" in June, launching Crew Dragon atop a rocket, then igniting its Super Draco thrusters to demonstrate the ability to rapidly propel the capsule away from a (hypothetical) exploding rocket. Successful completion of that test would have permitted the company to launch astronauts to ISS as early as July, in a mission dubbed Demo-2.

But due to the April anomaly, it's now likely that both the June in-flight abort test, and by extension the July launch attempt, will have to be postponed. For one thing, SpaceX will definitely have to build a new spaceship now. (Several are under construction , but that will still take time.) Some experts  are saying the ISS mission could slip into 2020, and even Koenigsmann admits that the accident was "not good news for the schedule."

Although SpaceX rival Boeing (NYSE:BA) has suffered delays and setbacks of its own in getting its CST-100 Starliner spacecraft ready for test flights, it's still expected to launch its first unmanned Starliner on a trial run to ISS in August. If that goes well, a manned mission could follow as early as November . With SpaceX now potentially seeing its first manned mission delayed into 2020, this seems to shift Boeing into the lead in this race. Boeing may very well win bragging rights as the company that returns American astronauts to space, aboard an American spaceship, for the first time since the shuttle program was shut down in 2011.

Such a success (if it happens) would tend to validate NASA's decision to pay Boeing $4.2 billion to run six transport missions to ISS aboard Starliner, versus awarding SpaceX only $2.6 billion for the same work. And if NASA paid a premium for reliability once, then Boeing's argument for continuing to charge higher prices (and earn bigger profit margins) than SpaceX does in the future would be bolstered.

Now all Boeing has to do is successfully launch its spaceship to ISS in August as planned -- and then do it again three months later, before SpaceX bounces back.