Please ensure Javascript is enabled for purposes of website accessibility
Log In Help Join The Motley Fool
Free Article Join Over 1 Million Premium Members And Get More In-Depth Stock Guidance and Research
By George Budwell - Updated May 16, 2019 at 4:40PM

Geron hints at a way forward for imetelstat in myelofibrosis, but the market isn't buying it.

Shares of the clinical-stage biotech Geron Corporation (GERN 1.40%) fell by as much as 7% today in response to a broad corporate update. What's got investors riled up?

Geron's latest corporate overview didn't sit well with investors today: The company announced a delay in the decision regarding imetelstat's potential development as a treatment for patients with the blood disorder myelofibrosis who are at "intermediate-2" or high risk. However, the market might be taking this news the wrong way. Here's what you need to know right now. 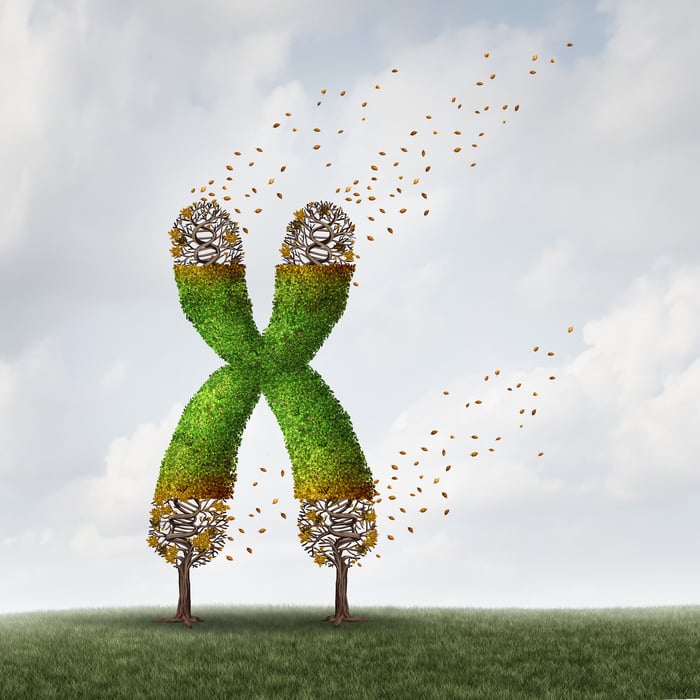 Geron's clinical news kicked off with an overview of imetelstat's ongoing development for lower-risk myelodysplastic syndromes (MDS). The company said that its plan to initiate a pivotal trial for this indication by midyear remains on track. As part of this effort, Geron has been working with Johnson & Johnson (JNJ -0.57%) to regain ownership rights to the drug, as well as ramping up its inventory by purchasing imetelstat from its former partner. That's all positive.

Geron's update on imetelstat's advanced myelofibrosis indication, however, definitely ruffled some feathers. The brief rundown is that the drug produced somewhat of a mixed bag in terms of its mid-stage trial results for this indication. As a result, the company previously decided to kick the can down the road on whether or not it would conduct a pivotal trial for myelofibrosis. Geron, in fact, was slated to make a final call on this indication by the third quarter of this year.

Today, the company said that a decision on imetelstat's myelofibrosis indication will now be delayed by another two quarters. The company wants to have an End of Phase 2 meeting with the Food and Drug Administration in the first quarter of 2020 before deciding on the next step. Investors apparently took this news to mean that Geron is considering scrapping this indication altogether -- that is, depending on what the FDA has to say. That's not altogether surprising, given that Geron can't afford to conduct two late-stage trials at the same time.

A more careful reading of the press release, though, suggests something else entirely. Specifically, Geron's CEO John Scarlett had this to say about the ongoing decision process in relation to imetelstat's development for myelofibrosis:

Our new development team has refined our regulatory strategies for myelofibrosis, which we plan to discuss at an End of Phase 2 meeting with the FDA by the end of the first quarter of 2020. We will be performing analyses to support these strategies, and we believe the results of these analyses will enhance the potential of determining a timely and cost-effective regulatory strategy for imetelstat in relapsed/refractory myelofibrosis.

While this statement is missing the magic words "accelerated approval," it seems to indicate that the company will indeed try to go this route. Imetelstat, after all, appears to offer a significant survival benefit in this patient population -- at least compared to historical norms. Unfortunately, regulators rarely consider historical norms when it comes to formal reviews. The gold standard in a case like this one is a pivotal trial that sports an active comparator arm.

The chances of the FDA granting imetelstat a conditional approval based on a mid-stage trial without an active comparator arm are slim at best. But this situation is unusual. There is no standard of care for this particular patient population, making it logistically impossible to pit imetelstat against an appropriate rival in a large, randomized trial. So, with a clear unmet medical need, the FDA may simply look past imetelstat's shortcomings in order to fill a glaring gap in the treatment paradigm for advanced myelofibrosis. That's a long shot, but it's not out of the realm of possibility, either.

That being said, investors shouldn't get too wound up quite yet. The smart play here is to take the conservative approach by remaining focused squarely on imetelstat's considerable prospects in MDS. The drug's mid-stage results in MDS paint a compelling picture of efficacy for at least some patients. Hopefully, these mid-stage results read through to the drug's upcoming pivotal trial.