Please ensure Javascript is enabled for purposes of website accessibility
Log In Help Join The Motley Fool
Free Article Join Over 1 Million Premium Members And Get More In-Depth Stock Guidance and Research
By Demitri Kalogeropoulos – May 17, 2019 at 1:30PM

The retailing segment of the business is on the mend, but big challenges remain for this unfocused company.

Overstock (OSTK -2.69%) is a difficult business for investors to value. It has two vastly different operating divisions, and both its online retailing segment and its cryptocurrency unit have been posting losses for over a year. Its sales base hasn't improved since 2016 and Overstock's retailing struggles, combined with aggressive spending on blockchain initiatives, caused annual losses to double to over $200 million in 2018.

But in early May, the company gave investors some reasons to feel a bit more confident in its turnaround plan. Its retail recovery is tracking just ahead of schedule, management said, and executives are as enthusiastic as ever about the outlook for their blockchain intellectual properties. Below are a few highlights from the presentation that CEO Patrick Byrne and his team gave describing those reasons for optimism. 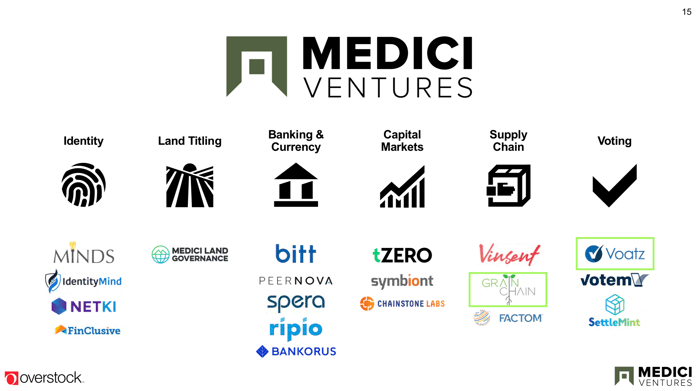 Overstock's Medici Ventures subsidiary has been busy laying the groundwork for blockchain technology to facilitate services across major industries like banking, financial trading, and real estate. This buildup is happening through a network of over a dozen subsidiary companies and brands, including its tZero trading platform.

Management said in late March that these technologies could play a role in a potentially massive market that aids in the tracking, valuation, and trading of trillions of dollars of financial assets. Investors didn't see more tangible evidence of these platforms delivering revenue or profits to Overstock this quarter, but the company is approaching major milestones over the next few months that might help test demand. These include the launch of a cryptocurrency trading platform in June. 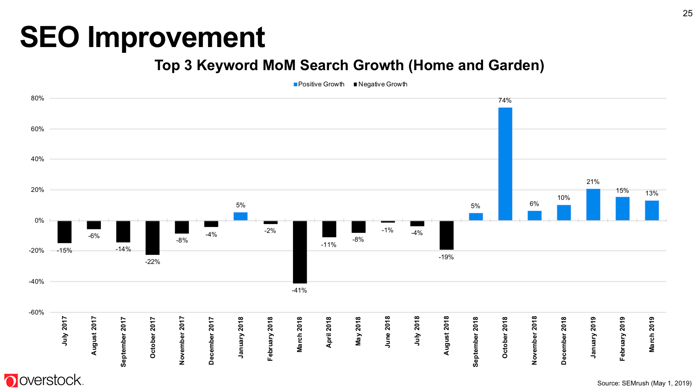 Overstock executives said that the picture looks much brighter under the surface as search engine ranking trends have improved in each of the last seven months after diving for more than a year. Another six months of gains like that, Byrne said, and the retail segment would be back on the footing it enjoyed before sales started collapsing in early 2017.

3. Returning to a profitable retailing posture 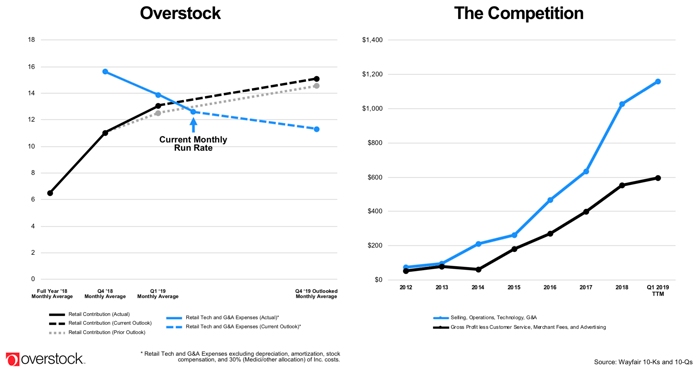 Management highlighted the fact that their reliance on balanced price increases combined with aggressive cost cuts to return the company to a profitable growth posture. In fact, executives raised their adjusted earnings outlook for the retailing segment and now see profits landing at between $165 million and $185 million this year, compared to $80 million in 2018. Getting in a dig at Wayfair, executives highlighted how Overstock's expenses are declining while its peer's are shooting higher.

The company left out the fact that Wayfair is soaking up market share in the core U.S. business. However, Overstock deserves credit for backing up the bold financial predictions it made back in March with solid results to start fiscal 2019.

Those wins don't, in my view, make Overstock an attractive stock today. The best-case scenario for the retailing arm is that it generates positive cash flow while stabilizing the business over time. It's also unclear what value -- if any -- will ultimately come from its blockchain initiatives. Thus, most investors will be happier watching this stock from the sidelines until management can at least produce a string of positive quarterly results.