Earlier this year, co-working office space provider WeWork got an infusion of cash from the private markets that valued it at about $47 billion, making it the most valuable start-up in the United States at the moment.

For the uninitiated, the nine-year-old company leases commercial real estate (primarily in office buildings), divides it up into smaller offices, adds desks, chairs, and common areas, and sublets the spaces. Its clients are small companies, startups, and freelancers who find leasing traditional office space impractical.

Even though WeWork more than doubled its revenue in 2018 to $1.82 billion, there are plenty of reasons to think that the company isn't deserving of its current $47 billion valuation. Let's look at some of the factors investors should consider before deciding to buy in -- if and when WeWork actually goes public. 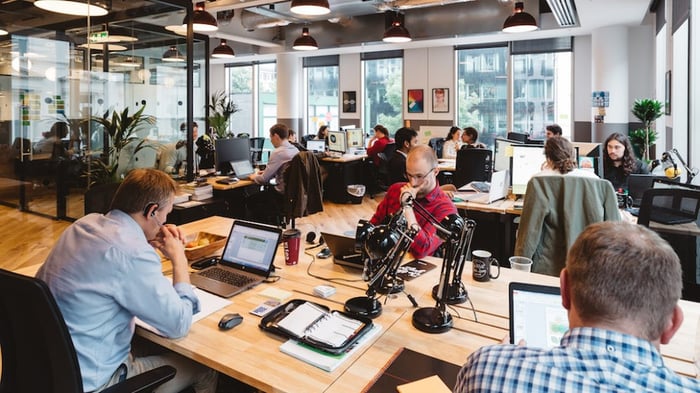 1. We don't know the full story

In anticipation of a potential IPO, WeWork filed a confidential application with the Securities and Exchange Commission late last year. That filing decision makes it difficult to have faith in a $47 billion valuation. There isn't enough data to paint an accurate financial picture. The details will eventually be released prior to any public offering, but for now, it just raises worries.

At the moment, we don't even know if the company will go public, as its leaders apparently haven't made a decision. "I don't know that we're going to go public," said co-founder and CEO Adam Neumann in an interview with Axios last week. "Every decision here gets made at the time of the decision. We have lots of cash in the bank and access to debt, so we're in no rush."

Like many companies that have IPOed recently, WeWork has been funding its rapid growth with mounting losses. It recently reported that it lost another $264 million in the first quarter. That was on top of the massive $1.93 billion it lost last year, which more than doubled its losses from the prior year.

Some would point out that its Q1 2019 loss was at least somewhat less than the $274 million it lost in Q1 2018, but that's the result of the company booking a one-time gain of $367 million. Excluding the impact of that gain, its year-over year losses more than doubled to $631 million.

3. Watch this hand not that one

Companies use a lot of non-GAAP financial measures in order to put the best face on their results for investors. One example is "adjusted EBITDA," which strips out a number of expenses, among them stock-based compensation and taxes.

WeWork has taken that a step further, coming up with a metric it calls "community-adjusted EBITDA," which excludes not only stock-based compensation and taxes, but other ongoing expenses like interest, depreciation, amortization, marketing, general and administrative, and research and design costs. While WeWork passed it off as an approximation of unit level economics, this type of financial sleight of hand can get companies -- and investors -- in trouble.

4. Whistling in the dark

Losses can be an inevitable part of starting and growing a business -- a fact that is widely understood in the investing community. That said, it's important for a company's management to be forthright about those losses rather than trying to whitewash them.

WeWork Co-president and CFO Artie Minson wants investors to view its losses as investments. "We really want to emphasize the difference between losing money and investing money," Minson said in an interview with CNBC. "You can lose money or you can invest money. At the end of this quarter, we have these cash flow-generating assets."

Sorry, Artie. No matter how you spin it, a loss is still a loss.

Giving CEOs total control of their companies has been all the rage over the past several years, and WeWork is firmly on board with the trend. CEO Adam Neumann owns Class B shares that control 65% of the voting rights of the company.

If that wasn't bad enough, Neumann has engaged in questionable business practices linked to the company he controls. Properties that he has an ownership interest in have been leased back to WeWork in deals that have put millions of dollars into his pocket. The company has paid rent of more than $12 million for buildings that are "partially owned by officers," according to The Wall Street Journal. That's a situation that many see as heavy with conflicts of interest.

Investing in company at or around its IPO is inherently risky, particularly as they generally don't have much of a track record. Those risks can be even higher when the company in question is unprofitable. In this case, however, there are a host of other warning signs for investors based on how business is being conducted at WeWork.

With all the glaring questions and red flags surrounding the company, and so many ways things could go south for it, WeWork is one IPO investors should steer clear of.