If you only watched Redfin's (NASDAQ:RDFN) share price on May 9, you'd think management must have painted a pretty grim picture during the earnings call.

And in some ways, I suppose you could argue that was true -- at least in the near term. The company's losses doubled as it invested heavily in marketing and infrastructure, and management guided for a greater loss than analysts had anticipated during this year's second quarter.

But I think Redfin's long-term growth story is solidly intact, and I'm a very happy shareholder after reading May 9's earnings release. Here are three numbers that really underline just how long its growth ramp could be. 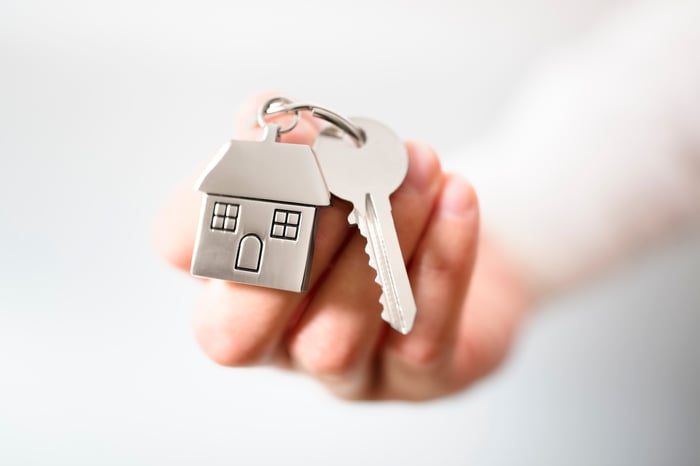 Redfin attempts to differentiate its brokerage services a number of ways, but the value prop that most clearly resonates for me (and, I think, most consumers) is reduced listing and buyer's agent fees. Redfin charges a 1% to 1.5% listing fee and a variable buyer's agent fee (also under 3%). Its estimate is that the average person both selling and purchasing a $500,000 house with Redfin would save $12,000 total in fees.

I may be a little biased, because I used a discount agent (full disclosure: not Redfin) when I bought my house -- and saved $8,000 at closing because he rebated me part of the fee the sellers paid him. But it's hard for me to imagine a better value prop than "we'll charge you less than other people for essentially the same service."

Does it seem wild to believe that Redfin could one day reach 5% market share as more people get comfortable with the idea that you can receive similar value at a lower cost?

That's the number of markets where the new RedfinNow service is available. (By contrast, Redfin's most mature business, real estate brokerage, is available in 91 markets and to roughly 78% of the total U.S. population.)

RedfinNow is, in my opinion, Redfin's most speculative and intriguing business. Here's how it works:

Let's say a seller needs to get out of his or her house quickly for any number of possible reasons. RedfinNow will offer cash for the house in exchange for a 7% fee. That makes it a little more expensive than putting the house on the market with a traditional real estate agent (2.5% to 3% fee for the seller's agent, same amount for the buyer's agent) and a lot more expensive than listing the house with Redfin.

But it's also a lot faster and more convenient.

Now, companies offering cash for homes often have a seedy reputation for preying on homeowners in need of a quick exit with lowball offers. But it looks like Redfin is approaching this with a customer focus in mind. As CEO Glenn Kelman noted during Redfin's most recent earnings call, "In April, we began asking homeowners seeking an instant offer on redfin.com if they also wanted to discuss with a Redfin listing agent what their home could sell for in a conventional sale. More than three in four asked to explore both options."

That seems...like a very reasonable way to do things.

This way, customers can decide what best fits their needs, and either way Redfin benefits from the transaction. In fact, it's not entirely clear to me which way Redfin benefits more -- sure, the fees are higher if it buys the house for cash, but then Redfin has to turn around and pay out for renovations, not to mention the extra cost and risk of carrying these houses on its balance sheet. By contrast, building the agent relationship in an open market sale might mean Redfin can benefit from repeat business (leveraging its 58% higher repeat business rate compared with other brokerages) on a much slimmer set of expenses.

So, RedfinNow can add to business growth either by:

While I'm not aware of any data helping get at No. 1 (in large part because it just started meaningfully exploring this in April), there's plenty of data on No. 2. RedfinNow grew quickly over the last year, generating $21.4 million in revenue in the first quarter of 2019 versus just $3.1 million in Q1 2018.

I expect those services to expand into additional states in the coming quarters and years, offering Redfin another enormous growth lever as it begins to penetrate these markets.

Redfin's value prop for these services is simple: convenience.

Customers who use all three (brokerage, mortgage, and title) can attend a closing digitally instead of having to sit in a physical office with everyone. I'd be shocked if Redfin didn't ultimately offer some financial incentives for people to "bundle" their real estate services -- but right now, there's no need to.

That's for two reasons: First, it makes sense for management to understand what the baseline demand for these services is without offering incentives. And second, because Redfin hasn't hired enough staff to handle all its current customers. CEO Kelman noted on the recent earnings call that "Redfin Mortgage had to turn away would-be customers because we hadn't hired enough staff to serve that many people well."

That's a problem, but kind of an awesome problem to have.

These services are tiny right now, but I expect we can see them add materially to Redfin's bottom line in coming quarters.

Over the longer term, you can see management's plan gradually taking shape.

Previously, its funnel was simple: Use the website to generate leads, then sell people on brokerage services.

Now it's gradually becoming more complex: Generate leads from the website, sell people on brokerage services, then cross-sell them on mortgage and title services. (Or just buy the house outright and resell it using those same agents -- perhaps to a Redfin buyer who uses mortgage and title services!) Capture value at every point in the real estate transaction, gradually integrating the services for a more seamless customer experience.

So, not only does Redfin have a huge opportunity to grow market share -- it also has a big opportunity to better monetize every customer who enters its universe.

If that's not a growth ramp, I don't know what is.