For many years, Intel (NASDAQ:INTC) was the dominant force in computing; the company's chips, marked by the familiar "Intel Inside" logo, were widely accepted as the gold standard for personal computing and enterprise servers. As computing devices proliferate, it would seem that Intel should benefit in the years ahead.

And yet, Intel's stock has hit the skids recently. Lackluster earnings, a tepid analyst-day presentation, and the lingering trade war have all caused Intel's stock to fall 3.2% in 2019, versus a gain of 14.9% for the S&P 500. 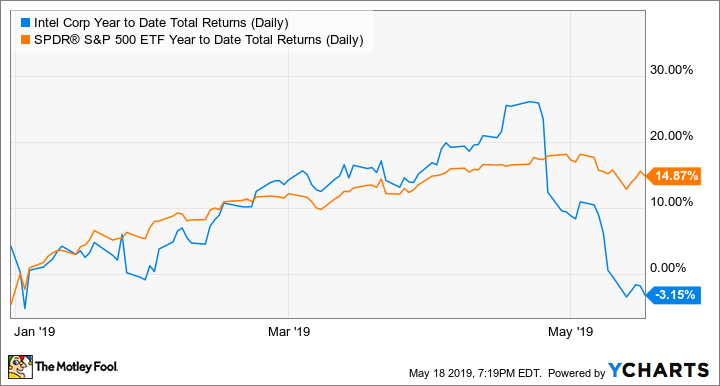 Given that the blue chip has come down so much and trades at a very cheap-looking 10.2 P/E ratio, investors may be eager to snap up discounted shares.

But I'd think twice about buying Intel. The company is facing numerous headwinds, none of which can be fixed easily or quickly. 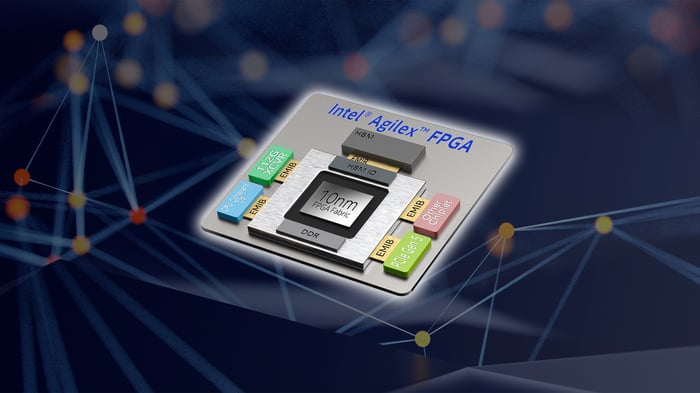 First, Intel may have lost the very important competitive edge it's held for many years. Intel does its own manufacturing, and this vertical integration has traditionally enabled it to keep its chips one step ahead of rivals, giving it 90%-plus market share in PC and data center processors.

However, longtime rival Advanced Micro Devices (NASDAQ:AMD) appears not only to have caught up to Intel in the race to a 7-nanometer chip, but surpassed it. AMD has already released a 7-nanometer gaming chip called Radeon VII, and its Ryzen CPUs, which rival Intel's x86 CPUs, will be out in the third quarter. Meanwhile, Intel's 10-nanometer CPUs (equivalent to AMD's 7-nanomter offering) have been delayed numerous times, and will only start shipping by the holiday season of 2019. In addition, AMD's 7-nanometer data center Rome Epyc CPUs will also be out in the third quarter, while Intel's Ice Lake 10-nanometer data center chips won't begin shipping in volume until the first half of 2020.

There's little question that AMD's new processors are bound to take some market share from Intel; the question is how much. Even if Intel holds on to more share than analysts expect, it may have to cut its prices.

Not only has Intel fallen behind AMD in the race to 7-nanometer, but Intel's existing chips have been beset by multiple security problems. In January 2018, the company revealed the Spectre and Meltdown security flaws. Though these flaws also affected rival chips, the bugs primarily targeted Intel. While Intel was able to quickly patch the problem with software, the patches led to a decrease in chip performance.

And just last week, researchers discovered another flaw. This one, called Zombieload, appears to only affect Intel chips. As with Meltdown and Spectre, Intel released patches that should fix the flaw, yet like its other patches, this should also slow performance.

Recurring security flaws are another headwind to Intel's brand, and could chip away at the processing giant's moat even further.

The damage from Intel's recent missteps seems to be taking a toll on its growth prospects. At its recent analyst day, management forecast low-single-digit growth over the next three years. That's a big step down from the company's robust 12.9% revenue growth in 2018, which was fueled by a large buildout in the public cloud.

The company does intend to achieve $6 per share in earnings by either 2022 or 2023, but that only amounts to a 5.5%-7.5% EPS growth rate, with a large part of the increase due to share repurchases and other "big bets" paying off.

These "big bets" should occur in new businesses such as 5G base stations, self-driving cars, and FPGAs (programmable electronic circuits). However, in many of these important growth markets, Intel is trying to catch up to established leaders. So while a lot of Intel's growth drivers are in exciting markets, success is far from assured.

No CEO wanted the job?

Finally, one can't help but wonder about Intel's path under new CEO Bob Swan. Swan had been CFO under previous CEO Brian Krzanich, who resigned in 2018 after revelations of an affair with an employee. Swan's selection is curious, since he initially said he didn't want the permanent CEO role. Yet in January, Swan accepted the permanent job, saying, "I went from loving my day job to loving the company. The second thing: I was asked."

That doesn't seem like a particularly enthusiastic answer, and suggests Intel found it difficult to find someone else willing to take the job. This may indicate more deep-seated problems at the company that the public just isn't aware of.

Technology is an industry that moves fast, which can be exciting, but it also means the potential for disruption is high. It appears Intel's competitive position is at least partially being disrupted, as the world moves from a PC- and mobile-centric era to one dominated by big data and artificial intelligence.

If Intel can execute better in the future, the stock certainly seems cheap, but if competitors continue to gain and Intel finds it difficult to penetrate new markets, financials could deteriorate and the stock could turn into a value trap. I'm not confident in either outcome, so I'm happy watching from the sidelines for now.