The potential for this fantasy role-playing game is only just now being realized.

The Transformers franchise has delivered almost $5 billion in box office receipts for Hasbro (HAS -0.24%), including the Bumblebee spinoff, as well as untold hundreds of millions of dollars in additional toy sales, TV programming revenue, and more.

And though there may be more movies for the franchise in the future, it's getting a bit long in the tooth, and Bumblebee somehow did worse than Transformers: The Last Knight, which seemed to sap whatever remaining vigor the series had left. That's why Hasbro's Magic: The Gathering role-playing card game may be the toymaker's most important franchise today.

Transformers was the past; Magic increasingly looks to be the future. 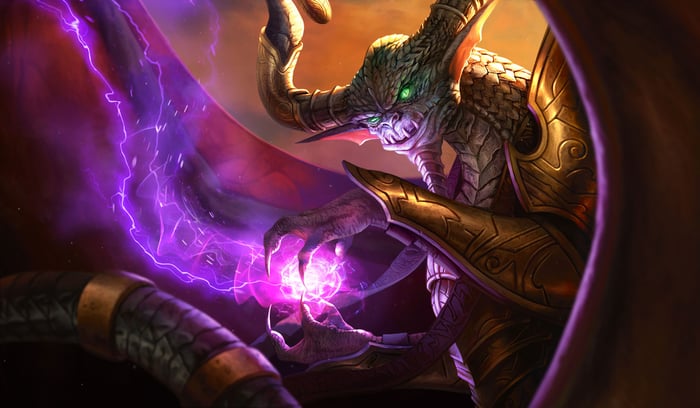 Collectibles, gaming, and fantasy all in one

Now into its 26th year, Magic has arguably surpassed even the granddaddy of all role-playing games, Dungeons & Dragons, though thanks to Twitch, the Amazon.com (AMZN -1.14%) live-streaming video game platform, it too is enjoying a resurgence in popularity.

Magic is a collectible card game in which a player assumes a character's identity in an attempt to beat one or more other players by casting spells and acquiring "mana" to become more powerful and cast more powerful spells. The powers are determined by decks of cards that players draw from, and as play progresses a character can become stronger or weaker until he finally dies when his total life points reach zero.

Although interest in the game has ebbed and flowed over the years (though it's mostly been flowing) it now seems to be gaining more popularity than previously thought possible. That's because Hasbro gave it a digital makeover to keep it relevant, and alongside the tremendous growth of esports, Magic is leveling up.

Casting a spell over gaming

The response to those digital efforts, which really only went live for the first time last December, has been nothing short of dramatic. CEO Brian Goldner told analysts that its visibility has received a substantial boost from Twitch, and just during beta testing over 70 million games had been played through Magic: The Gathering Arena, a new online play portal -- not to be confused with MTG Online, which was essentially just the tabletop version ported to the internet without the fancy graphics.

"Engagement with Magic: The Gathering is growing in both digital gaming and analog tabletop," Goldner said. "In-store player growth increased double digits and grew at an even higher rate for new players."

A rich opportunity to cash in

In March, Hasbro held its first big real-money tournament for Magic: The Gathering players, the Mythic Invitational, and it gave away $1 million in prize money, with more to come this year.

Now it's clear the dollar amounts we're seeing with Magic don't yet approach the level of money Transformers generated, and Hasbro will still massively profit from its relationship with Disney (DIS 0.20%) and its Marvel Comics unit. Avengers: Endgame, for example, is a monster success, with over $2.5 billion in global box office receipts so far.

Yet Magic was also supposed to be a movie back when Hasbro originally signed its six-movie deal with Universal Pictures. It hasn't gone anywhere to date, though that doesn't mean it never will. Given the success of the Lord of the Rings trilogy, along with Amazon's development of a series based on the iconic books, and the more recent success of Game of Thrones (notwithstanding the disaster of the final season) a Magic movie could still generate substantial returns and provide Hasbro an evergreen source of box office receipts.

The Transformers film franchise looks to be past its prime, and the Avengers might not be able to recapture their past glory, particularly if the Captain Marvel installment is any indication of where the franchise is headed. Moreover, Disney has made similar critical disasters with its last few Star Wars movies. Magic: The Gathering, however, could bridge the divide between physical and digital, and across gaming, movies, and more, potentially making it one of the most important properties in Hasbro's portfolio today.