Please ensure Javascript is enabled for purposes of website accessibility
Log In Help Join The Motley Fool
Free Article Join Over 1 Million Premium Members And Get More In-Depth Stock Guidance and Research
By Dan Caplinger - May 21, 2019 at 12:07PM

Tuesday morning brought some relief to the stock market.

Stocks were generally higher on Tuesday, as investors finally took some comfort from the possibility that things might not turn out as badly on the geopolitical front as many have feared in recent days. In particular, some olive branches from the Commerce Department that temporarily suspended the worst prohibitions against doing business with China's Huawei seemed to open the door to a potential longer-term resolution down the road. As of 11:45 a.m. EDT, the Dow Jones Industrial Average (^DJI 0.00%) was up 131 points to 25,811. The S&P 500 (^GSPC 2.39%) rose 22 points to 2,862, and the Nasdaq Composite (^IXIC 0.00%) picked up 82 points to 7,784.

Earnings season is largely over, but a few stragglers with nonstandard fiscal years are still reporting results, and Home Depot (HD 2.19%) was the highest-profile company among today's group. Meanwhile, Tesla (TSLA 5.71%) got another vote of no confidence from Wall Street analysts, with one set of prognosticators laying out a case in which the stock could see its price plunge all the way to $10 per share.

Shares of Home Depot were down a fraction of a percent following the release of the home improvement retailer's fiscal first-quarter financial results. Home Depot said that revenue was higher by 5.7% compared to the year-earlier period, with net income up 4.5%. A reduction in outstanding share counts lifted per-share earnings by about 9%, topping what most investors following the stock had anticipated. 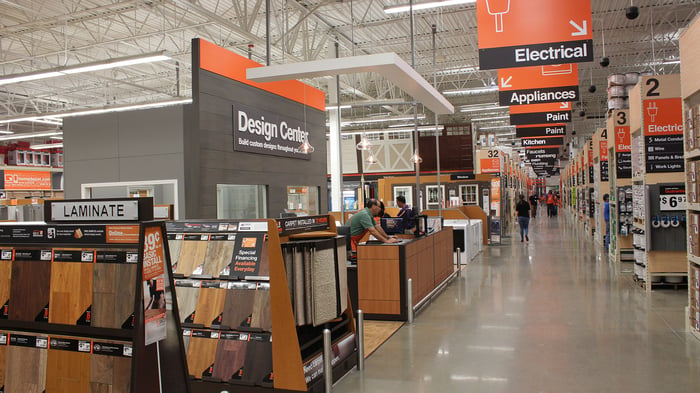 Not everything went well for the home improvement specialist. Home Depot said that comparable sales increased just 2.5%, including a 3% rise for its U.S.-based operations. That's quite a bit weaker than hoped, especially compared to a strong finish to 2018 for the retailer.

CEO Craig Menear explained some of what was behind the tough times while remaining optimistic. "We were pleased with the underlying performance of the core business," Menear said, "despite unfavorable weather in February and significant deflation in lumber prices compared to a year ago."

Looking ahead, Home Depot has reason to be upbeat. Favorable conditions in the broader U.S. economy in general and in the housing market in particular should help lift the company's immediate prospects, and ongoing efforts to bolster its business against competition are likely to remain effective indefinitely into the future. That'll play a big role in whether the stock challenges record highs in the weeks and months to come.

Elsewhere, Tesla's stock was down almost 1%, recovering from a drop of as much as 4% earlier in the session. Amid a rising tide of negative publicity, the electric-auto maker had to deal with a slam from stock analysts at Morgan Stanley this morning.

The Wall Street giant's analyst team laid out an argument for why Tesla's shares could plunge another 95% to hit just $10 per share. In essence, the potential problem for Tesla involves whether the Chinese market for electric vehicles will prove as strong for the company as previously thought. With trade tensions remaining high, it's conceivable that the Chinese government could step in to effectively close the market to Tesla vehicles. If that happens, it would mean an estimated $16 billion to $17 billion in lost sales, and that justified a cut in Morgan Stanley's worst-case scenario from $97 per share to $10 per share.

To be fair, that's just the doomsday scenario. Morgan Stanley retained a $230 price target for Tesla, recognizing the significant value that the company's expertise and intellectual property would have for would-be acquirers. Analysts at rival Baird also made negative comments about Tesla, but even after a $60-per-share cut, Baird's price target remains much higher at $340.

Tesla's problems have piled up lately, including production challenges, liquidity concerns, regulatory threats, and CEO-induced distractions that have caused some investors to lose confidence in the stock. Tesla has a lot of promise as a business, but it'll need to address big obstacles to success before it can get moving in the right direction once again.