Please ensure Javascript is enabled for purposes of website accessibility
Log In Help Join The Motley Fool
Free Article Join Over 1 Million Premium Members And Get More In-Depth Stock Guidance and Research
By Evan Niu, CFA - Updated May 22, 2019 at 10:57AM

Chinese vendors are starting to catch up with domestic heavyweights.

Up until now, the U.S. has been the most important smart-speaker market in the world, benefiting domestic tech heavyweights like Amazon.com and Alphabet (GOOG 4.16%) (GOOGL 4.20%) subsidiary Google, which are enjoying considerable success in smart speakers as they continue to take over the smart-home space. Looking to build on that momentum, the search giant recently rebranded its smart-home efforts under the Google Nest brand while unveiling a new Nest Hub Max to compete with Amazon's Echo Show.

However, China just overtook the U.S. as the most important smart-speaker market. 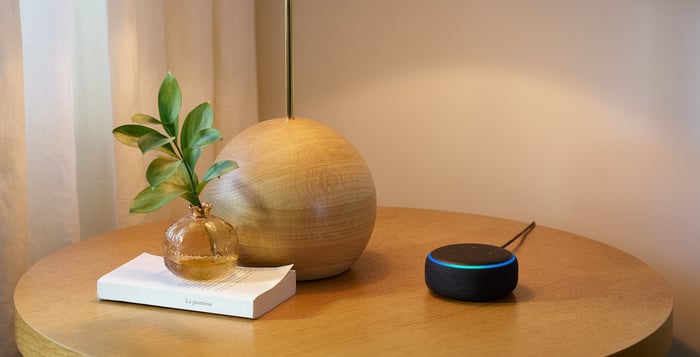 Market researcher Canalys released its estimates on the smart-speaker market for the first quarter this week, showing a significant spike in unit volumes in China. China was able to grab 51% of worldwide shipments, compared to the 24% that shipped within the U.S. Worldwide volumes jumped 131% to 20.7 million. Unlike the U.S., China's holiday shopping season and New Year fall in the first quarter. Baidu became the top Chinese vendor, thanks in part to a sponsorship deal around the Lunar New Year that generated considerable interest, according to Canalys.

Here are the top five vendors:

Data source: Canalys. *Baidu had not yet entered the smart speaker market a year ago.

Amazon and Google are still dominating the market globally, but geographical shifts could have impacts on those companies' prominence.

Small, affordable smart speakers are where it's at

It's become abundantly clear that small, affordable smart speakers are what's driving unit volume growth, particularly for Amazon and Google. Retailing for $50, the Amazon Echo Dot and Google Home Mini are often available for even less, thanks to various types of promotions like reduced pricing or giveaways.

Just today, home audio specialist Bose announced its smallest and most affordable smart speaker to date, the $260 Home Speaker 300. Samsung's Galaxy Home Mini was just detailed in FCC filings, even though the full-sized version hasn't even shipped yet. Even Comcast is reportedly working on a health-oriented smart speaker, according to CNBC, although it's not clear what price point the telecommunications and media conglomerate may be targeting.

Neither Amazon nor Google have strong positions in China. Amazon just shuttered its Chinese e-commerce operations, and Google's online services have long been neutered due to government censorship and other factors. On the other hand, Apple (AAPL 4.08%) has a strong presence in the Chinese market, and Siri is one of few voice assistants that can handle Mandarin, one of the more challenging languages for robots to understand linguistically.

Apple's HomePod launched in China earlier this year, but its premium pricing will inevitably hurt demand. If all of that isn't enough to convince Apple to launch an affordable HomePod Mini, then I don't know what is.