Please ensure Javascript is enabled for purposes of website accessibility
Log In Help Join The Motley Fool
Free Article Join Over 1 Million Premium Members And Get More In-Depth Stock Guidance and Research
By Evan Niu, CFA - May 7, 2019 at 6:34PM

The search giant looks to leverage the stronger brand while competing with Amazon.

Alphabet (GOOG -0.54%) (GOOGL -0.57%) subsidiary Google kicked off its annual I/O developer conference today, announcing all sorts of news around both hardware and software during the opening keynote. The search giant has enjoyed particular success in smart-home technology, including its popular line of smart speakers and the Home Hub that was introduced last year.

In line with rumors that Google was planning to rebrand its smart-home offerings, the company has just confirmed that it is indeed consolidating all of its smart-home efforts under the Nest brand. 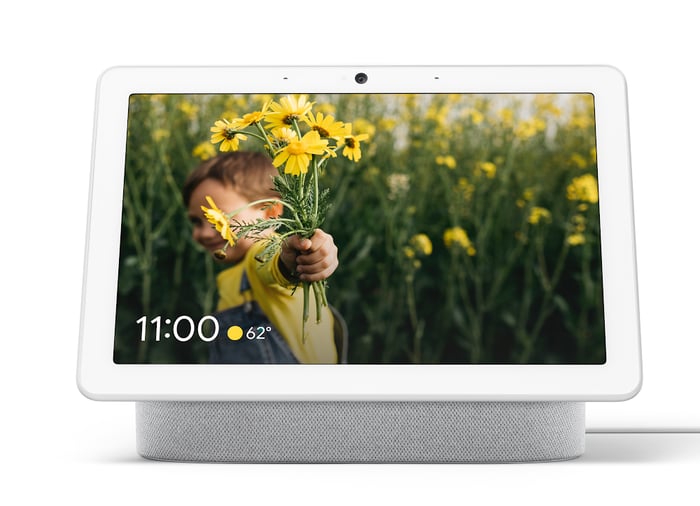 The Nest brand is stronger

Over the past year, we've brought the Nest and Google teams together to deliver on our vision of the helpful home. And today we're further simplifying things, bringing all these products together under the Nest name. As a single team, and a single product family, we're following a set of guiding principles that reflect our commitment to putting people first.

Osterloh is referring to the corporate reshuffling that took place in early 2018, when Nest was moved out of Alphabet's Other Bets segment and back under the Google umbrella. It didn't really make much sense to have two separate divisions working on similar products, and Nest already has a strong brand in smart-home products anyway.

The Google Home Hub will be renamed the Nest Hub, and Osterloh unveiled the new Nest Hub Max, a larger version with a bigger 10-inch display and a camera. The first Hub specifically did not include a camera for privacy considerations. The new camera is essentially a Nest Camera, integrating with Nest's platform, so it can tap into video doorbells and security cameras, but can also be used for video calling. The Nest Hub Max also includes local facial recognition in order to better personalize the device.

Introducing #nesthubmax, the ultimate smart display built with a screen that's big enough for everything from video chats to YouTube streaming. #io19 pic.twitter.com/iJe4CNeZND

Nest Hub Max is priced at $229 and ships this summer. The device will compete with Amazon.com's (AMZN -1.13%) second-generation Echo Show, which similarly features a 10-inch display and launched last year at $230 before recently getting a price cut to $180. Google will flank the Echo Show with the $100 Nest Hub and $230 Nest Hub Max. Google and Amazon have emerged as the leading smart-home platform makers, and it's clear the two tech giants are taking product cues from one another.

Despite some headwinds in the premium smartphone business (Google also announced the midrange Pixel 3A and 3A XL today), Google's hardware business is growing and profitable. In contrast, Google had disclosed that in 2017 Nest generated $726 million in revenue and $621 million in operating losses. That's quite a reversal of fortunes, and Google will keep building on that smart-home momentum for the foreseeable future.