Shares of Clean Energy Fuels (NASDAQ:CLNE) surged more than 18% on Wednesday morning after the alternative fuels company announced an agreement with United Parcel Service (NYSE:UPS) under which the shipping giant will purchase 170 million gallon equivalents of renewable natural gas (RNG) though 2026. It's the largest corporate commitment to RNG to date in the U.S., and a major milestone for Clean Energy Fuels. The stock price jump moderated back to a gain of around 7.5% as of 11:15 a.m.

UPS has pledged to reduce its ground fleet's greenhouse gas emissions by 12% by 2025, and toward that end, it has been increasing its use of RNG as a fuel source since 2014. At this point, RNG and renewable diesel have replaced what would have been more than 20% of the company's conventional diesel and gasoline fuel consumption. 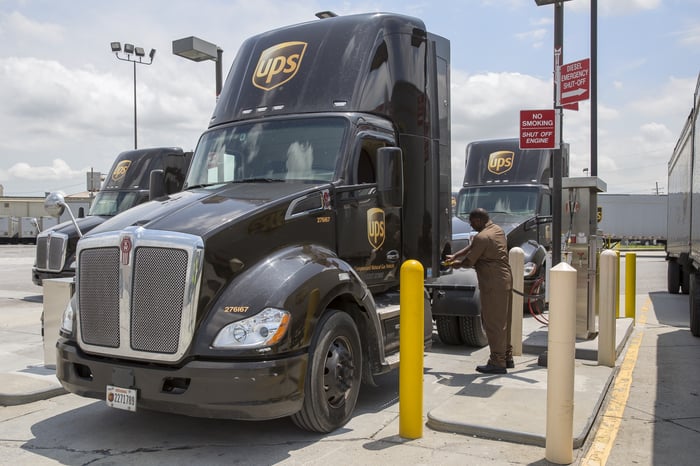 Clean Energy's RNG, or biomethane, is derived from sources including decomposing organic waste in landfills, wastewater treatment, and agriculture, and can be distributed through natural gas pipelines. According to the company, its RNG "yields at least a 70% reduction in lifecycle greenhouse gas emissions when compared to conventional diesel or gasoline."

"Together, UPS and Clean Energy are moving the industry forward and toward a nation of energy independence by pushing for RNG at scale," Tyler Henn, vice president and general manager of Clean Energy Renewables, said in a statement. "We're pleased to be able to fulfill the growing demand for RNG as more fleets seek a clean, economical alternative."

Shares of Clean Energy Fuels were already on a tear prior to the announcement, thanks in large part to solid 2018 results. They're now up 66% year to date.

This is a company with influential backers and significant momentum, but it is still a small part of the fuel market, and faces competition both from other natural gas providers and companies pushing alternatives including electric propulsion as a better option.

Having a customer the size of UPS committing to a major expansion of purchases is a significant win for Clean Energy Fuels.