Two of the more dominant global tech businesses are Alibaba (NYSE:BABA) and Alphabet (NASDAQ:GOOG) (NASDAQ:GOOGL). Both companies have been under pressure recently due to angst over the U.S.-China trade war. And yet both remain great tech blue chips that are more defensive than other tech companies, such as those that focus on hardware.

Alibaba is the leading Chinese e-commerce site, with emerging divisions in cloud, entertainment, food delivery, and others. Meanwhile, Alphabet's Google is the world's dominant search engine outside of China and is also making big bets in cloud, hardware, and next-generation technologies like self-driving cars, internet accessibility, and medical science.

Both have some overlapping businesses, but Alibaba is mainly affected by Chinese e-commerce, whereas Alphabet is mostly affected by worldwide digital advertising, with a handful of other growth seeds that don't contribute much to earnings.

So which is the better buy today? 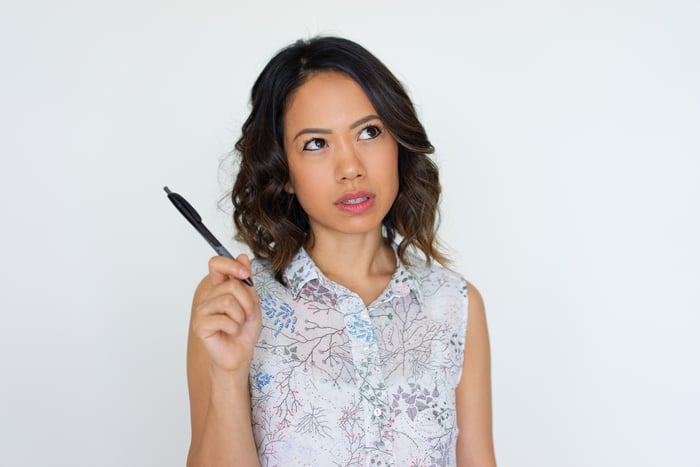 On revenue growth, things look more favorable for Alibaba. Clearly, over the past few years, Chinese e-commerce has heavily outgrown Google's search business, though both companies' growth rates are quite enviable: 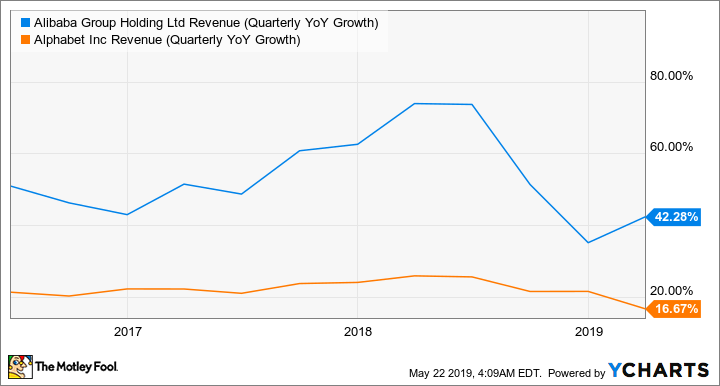 Alibaba's growth in its home currency was actually a bit higher, at 51% last quarter, but lower in USD due to the devaluation of the Chinese yuan. Alibaba's growth was, in part, bought via acquisition. Last year, Alibaba bought Ele.me, a local services and food delivery business, which contributed 5% to revenue. The company bought streaming service Youku Tudou in 2016 for $5.4 billion, moving Alibaba headlong into the streaming media segment. Still, Alibaba's core business remains very healthy, growing at a 45% rate in local currency last quarter.

Meanwhile, Alphabet's growth was a mere 16.7% in the quarter, though a better 19% when factoring out currency. The growth mainly came from Google's search business, along with YouTube advertising. While Alphabet's growth is slower, it's also operating off a much bigger base than Alibaba, making $36.3 billion in revenue in the first quarter, versus Alibaba's $13.9 billion.

Both companies are also incubating cloud computing businesses, with Alibaba's cloud growing 76% year over year to RMB7.73 billion (US$1.15 billion). Alphabet, unfortunately, doesn't break out its cloud segment specifically but groups it in with its hardware and app store in the Google Other category. That category grew just 25.1% to $5.45 billion, although management said its cloud segment grew faster than that figure, with hardware growing at a lower rate.

Therefore, in both its core business and cloud business, Alibaba wins the growth race, though not by a huge amount.

While Alibaba's growth has been stellar of late, the company's margins have been going in the opposite direction. Alibaba's core business is highly profitable -- it charges a commission on items sold on its platform and also sells advertising on those same platforms.

Those Innovation Initiatives are very much like Alphabet's Other Bets segment, which span high-risk, high-upside bets on things like self-driving cars, AI research, bringing internet connectivity to the developing world, and next-generation medical science. Those are also a drag on Alphabet's margins, as those Other Bets ran a loss of $868 million last quarter for an operating margin of negative 510%.

Valued off of their PE ratios, Alibaba trades at a slightly higher valuation than Alphabet on both a current and forward PE-ratio basis. 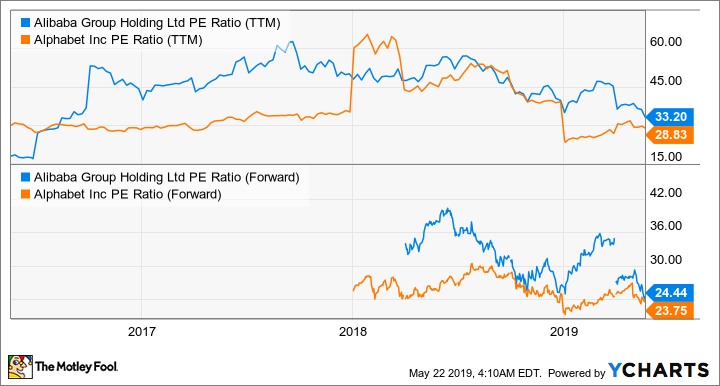 Clearly, the market is ignoring Alibaba's margin compression, instead focusing on its blistering 50%-plus growth (in local currency), with the faith that it can turn some money losers into money winners.

However, Alphabet is even cheaper than the above metrics show. Embedded in its value is nearly $110 billion in net cash, about 15% of its market capitalization, while Alibaba only has about $28.7 billion in cash, offset by $17.6 billion in debt, for only an $11 billion net cash position.

At two votes to one, my money's currently on Alphabet as a more stable and conservative play. That bet is especially true in light of U.S.-China trade tensions, which could negatively affect China's economy and currency.

While Alibaba's top-line growth and all-encompassing business model make a compelling growth story, Alphabet has quite a number of exciting growth seeds as well, a much better balance sheet, and less macroeconomic risk than Alibaba.