There is great value in long-term investing. However, in order to realize outstanding results from that strategy, you need to hold on through periods of volatility. Some traders try to "time the market," going in or out of cash, and always keeping "dry powder" at the ready. However, holding cash, along with excessive trading, can significantly cut into your returns.

That's why investors benefit greatly by buying and holding reliable, cash-generative companies with large cash positions. You can't often pick up such wonderful stocks at cheap prices, but when the market pulls back, such companies will be positioned to opportunistically repurchase their own shares, or buy other businesses at discounted rates.

Here are five rock-solid companies with some of the fattest wallets (er, balance sheets) on Wall Street. 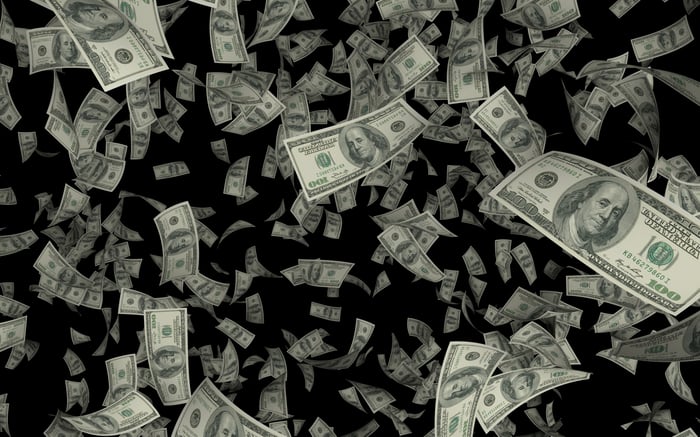 Microsoft (NASDAQ:MSFT) has been a huge winner over the past few years, thanks to its transformation under CEO Satya Nadella. Under Nadella, Microsoft has grown its Azure Cloud business into the clear No. 2 cloud computing player. Last quarter, Azure grew 73% with expanding margins, leading to record results. Nadella has also made substantial acquisitions, such as GitHub in 2018 and LinkedIn in 2016. Last quarter, Microsoft grew LinkedIn revenue nearly 30%, even three years after the acquisition.

Besides these exciting growth seeds, Microsoft's core Office and Dynamics software products continue to chug along, growing 12% and 13%, respectively, last quarter, with their as-a-service subscriptions growing at an even higher clip.

All these businesses are high-margin, which has enabled Microsoft to return huge amounts of cash to shareholders in the form of dividends and repurchases, all while growing the company's net cash pile for further big moves.

The next company on the list is Berkshire Hathaway (NYSE:BRK.A) (NYSE:BRK.B), a quaint little insurance outfit run by a guy named Buffett out of Omaha.

I'm speaking tongue-in-cheek, of course. From humble beginnings, Warren Buffett has grown Berkshire Hathaway into a half-trillion-dollar conglomerate. Berkshire's model is a modification of a standard insurance model. Buffett invests this "float" he gets from sprawling insurance operations, then buys either cheap stocks or entire businesses.

Lately, Buffett hasn't been finding many bargains. Meanwhile, Berkshire is reaping the fruits of past investment decisions, especially huge investments made during the Great Recession. That has caused Berkshire's cash to pile up and up, to the point where it now has about $110 billion in cash against just $34 billion in debt (though its railroad, energy, and utility businesses and are not counted in the calculation).

Buffett and company now have so much cash that Berkshire relaxed its rules regarding stock repurchases last summer. However, should a downturn strike, you can be sure Berkshire will have many fine options in addition to its own stock.

Unlike Microsoft and Berkshire, as well as the next stock on this list, Alphabet hasn't done much in the way of share repurchases (though it does a bit to offset stock-based compensation) and doesn't pay a dividend. That has allowed Alphabet to pile up $113 billion in cash against just $4 billion in debt.

Instead, Alphabet has taken more of a venture-capital approach to its cash hoard, making lots and lots of "small" bets on potential big winners. For instance, Alphabet was an investor in both Lyft (NASDAQ:LYFT) and Uber, which are just now going public. In addition, Alphabet has made a number of ambitious "other bets" in fields such as self-driving cars (Waymo) and life sciences (Verily).

Still, these investments are relatively tiny compared with Google's massive digital advertising business. In case of a big stock market downturn, Alphabet may very well put its $100 billion-plus to work in a bigger way.

The next company on the list needs little introduction. You're likely reading this article on one of its products. Originally called Apple (NASDAQ:AAPL) Computer, it really hit the big time in 2007 with the introduction of the iPhone. The smartphone revolution happened in the years thereafter, but most smartphone companies don't make nearly the profits Apple does.

Apple has done a masterful job of extending its premium brand to an entire ecosystem of products that "just work" together, from laptops and desktops, to iPads, to the Apple Watch, and most recently, AirPods. But what's taking center stage now is Apple's services business, a high-margin and mostly recurring revenue stream. That's shored up Apple's financials somewhat even as iPhone sales are going through a soft patch.

Since the 2017 Tax Cuts and Jobs Act was passed, Apple has committed to becoming net-cash neutral over time, and has been aggressively returning cash to shareholders. In the past six months, Apple alone has returned $32.5 billion in repurchases and $7 billion in dividends. But management isn't stopping there -- the company just announced a 5% dividend increase and a $75 billion increase to its repurchase program.

You might have thought Apple had the largest cash hoard of any public company, and you'd be right. But Blackstone (NYSE:BX) has an even bigger pile of other people's money. As the world's largest alternative asset manager, Blackstone has raised numerous funds from institutions across private equity, real estate, hedge fund solutions, distressed debt, and even newer, innovative types of funds. The company's assets under management has swelled to an enormous $512 billion, with a whopping $132.6 billion in "dry powder," or cash ready for investments.

For instance, during the Great Recession, Blackstone took advantage by buying up homes at distressed prices. Blackstone would later go on to rent them before spinning them off into a new public company called Invitation Homes (NYSE:INVH) in 2017.

With the stock market's rise over the first quarter, management is staying patient for similar opportunities but has a bazooka at the ready.

A buyer on your behalf

Even if the market swoons and you're short on extra investable cash, these five top companies can swoop in and buy on your behalf. That's a pretty nice win-win for the long-term investor.