Shares of oil stocks are crashing today -- and it just so happens to coincide with a drop in oil prices. As of 10:30 a.m. EDT, the price of a barrel of West Texas Intermediate crude oil is down 5.2% to $58.20, and that price drop is taking oil stocks with it. Here are some of the notable companies that are down significantly at the time of this writing:

What may seem surprising is that most of the oil and gas companies taking it on the chin today don't generate revenue from the direct sale of the commodities. Instead, their business is greatly determined by the capital spending budgets of those that do. For years, this industry has suffered from smaller capital budgets as companies have been less than willing to spend on wells to explore for new sources. 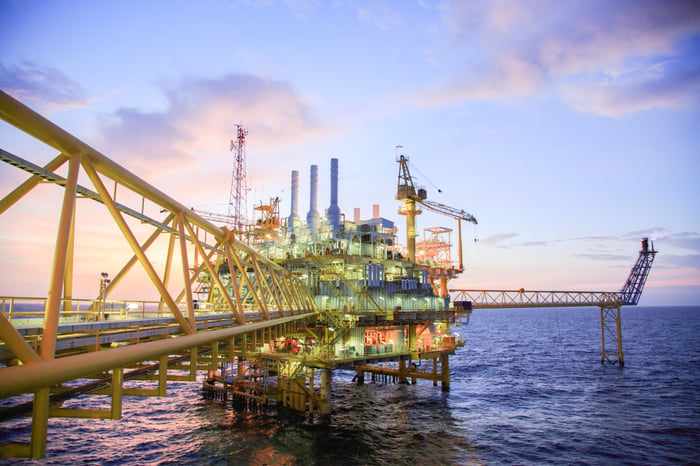 It's sophomoric to say that this one price drop is going to devastate these companies. Oil demand is still immense and growing, and this is a cyclical business that perpetually over- and underinvests. The concern surrounding these companies likely has to do with where those new capital spending dollars will go.

Part of the reason oil prices are falling today is a U.S. Energy Information Administration report that says crude oil inventories are at a two-year high in the U.S. and that American crude oil production rose to 12.2 million barrels per day.

Some of the reaction is obviously based on the short-term implications: Higher inventories mean less incentive to drill and therefore less work for Nabors and Superior. The longer-term ramification is that shale oil is growing so fast in the U.S. that it's possible that the need for other, more expensive sources of oil, such as offshore reservoirs, will decrease. If that were to happen, offshore drillers will end up fighting over fewer contracts.

It's a long-shot possibility that today's oil price drop and the EIA data are going to have a long-term impact. Inventory data in the U.S. make wild swings all the time. For every news story on higher inventories, there is another that could justify higher oil prices in the future.

Oil and gas is a cyclical business, and eventually, capital spending, which has suffered from shortages over the past few years, should catch up to the industry. When that happens, oil services companies will likely see significant upticks in revenue. How long that takes, though, is anyone's guess.