Please ensure Javascript is enabled for purposes of website accessibility
Log In Help Join The Motley Fool
Free Article Join Over 1 Million Premium Members And Get More In-Depth Stock Guidance and Research
By Jeremy Bowman – May 23, 2019 at 7:20PM

The retail giant is getting a much-needed home office makeover with a new campus-style headquarters in Arkansas.

Walmart (WMT 1.30%) may be the world's biggest company by revenue, but its corporate hometown doesn't exactly scream bright lights and big city. Bentonville, Arkansas, often gets high marks for livability, but it lacks access to a major airport, a professional sports team, and many other trappings that a sought-after young recruit might expect in the vicinity of a global company's headquarters.

Thanks in part to Silicon Valley heavyweights like Apple, Alphabet, and Facebook, corporate campuses with splashy perks and pristine facilities have become increasingly important as recruitment tools, and for companies to distinguish themselves from one another. As Walmart evolves from its brick-and-mortar retail beginnings into an omnichannel company whose future will be determined as much by e-commerce, apps, and other tech initiatives as it will by its stores, it's increasingly competing with tech companies and other prestigious employers for talent.

With that in mind, Walmart says it will open a brand new headquarters in stages over the next several years, giving it a state-of-the-art campus designed to foster collaboration and innovation -- and to appeal to those much-in-demand workers it's hoping to attract.

In its announcement late last week, Walmart said it had been imagining its dream home for the past couple of years, and was ready to begin turning it into a reality. From 2020 through 2024, it will construct its new HQ: a connected campus designed to foster creativity, speed, transparency, and collaboration. Each of the four "neighborhoods" on the campus will have convenient parking, expanded dining options, and flexible workspaces. They'll also be connected with bike trails.

The project has a focus on sustainability, with a goal of zero waste and a target of operating with 100% renewable energy. It will feature solar panels on top of parking decks, energy-efficient lighting and HVAC systems, and locally sourced building materials. It will also include natural elements like thousands of trees, shrubs and grasses to sustain wildlife, and more than 15 acres of lakes on a campus of 300-plus acres.

Finally, Walmart says the new campus will be true to its roots in Bentonville, and promote positive change in the community. It will be located a few miles from its current headquarters. 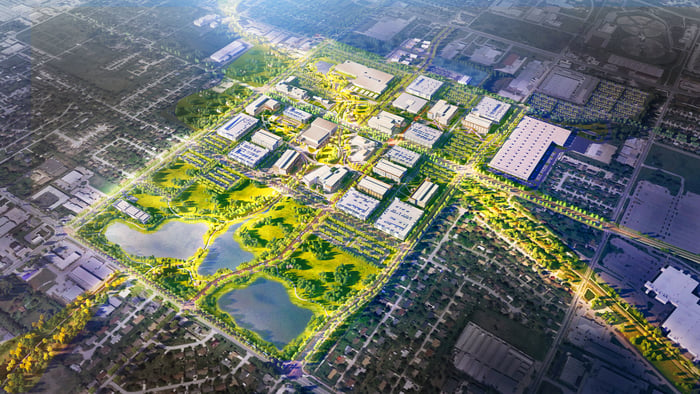 An artist's rendering shows an aerial view of the campus of Walmart's new headquarters in Bentonville, Arkansas. Image source: Walmart

Affirming the company's commitment to its hometown, CEO Doug McMillon said, "Arkansas has been good to us, and there's nowhere else we'd rather call home. When I imagine the next 60 years, I can't help but smile at the possibilities."

Currently, Walmart's 14,000 corporate employees work out of 21 buildings, some of which are former warehouses that were repurposed, and are now clearly outdated. In designing the new headquarters, Walmart borrowed ideas liberally from fellow corporate titans including Apple and McDonald's, as well as from educational institutions like Stanford, the University of Texas, and the University of Arkansas.

The company's biggest goal seems to be to eliminate the siloing that has been an endemic problem in the current HQ, and encourage different teams to communicate, collaborate, and cross-pollinate. Dan Bartlett, executive vice president of corporate affairs, said that the intention was to create something more like a college campus than a typical corporate headquarters. A difference from Amazon

Walmart's expansion in Bentonville, as well as its cozy relationship with its hometown and state, are in notable contrast to Amazon (AMZN 4.50%), which earlier this year backed away from plans to open half of its new "HQ2" in Queens, New York, due to pushback from some local officials and residents who, among other issues, feared that the e-commerce giant's arrival would drive up the cost of living. Amazon still plans to build its other HQ2 site in Northern Virginia, and said it would spread the jobs planned for New York around the country.

Amazon's choice to open a new, second headquarters may have been, in part, a reaction to the sometimes-frosty relationship it has developed with Seattle, its hometown. The company has battled with the local government over a head tax on its corporate employees, has been blamed for driving up housing costs, and is accused of being a bad neighbor. Amazon has 40,000 employees in Seattle, making it the city's largest employer, and will soon occupy 14 million square feet of office space there.  The company seems to believe it may be exhausting both the talent pool and goodwill it has in Seattle, and would be better off picking other locales in which to expand.

Walmart's HQ, by contrast, is viewed as a huge source of revenue and pride for Arkansas and its local region, so it clearly does not have that problem. In his presentation, Bartlett argued that the company can leverage its Bentonville home as a positive, giving employees ample outdoor space to work in, and amenities such as the ability to commute to work on bike trails. Indeed, the fact that it isn't headquartered in major city means that Walmart could provide its employees with a unique set of perks.

If this new campus delivers on its goals, Walmart may turn what has been a liability into a distinct advantage.