Shares of Snapchat parent Snap (NYSE:SNAP) have jumped today, up by 4% as of 11:10 a.m. EDT, after The Wall Street Journal reported that the social media company is in talks with record labels to allow users to incorporate music into their posts. That should help Snapchat compete better on an important front.

Snap is trying to secure broad license agreements with the major record labels that would allow users to include music in their social media posts, such as the Stories format that Snapchat popularized. Up until now, Snap has been getting licenses that cover individual artists on a case-by-case basis, according to the report. 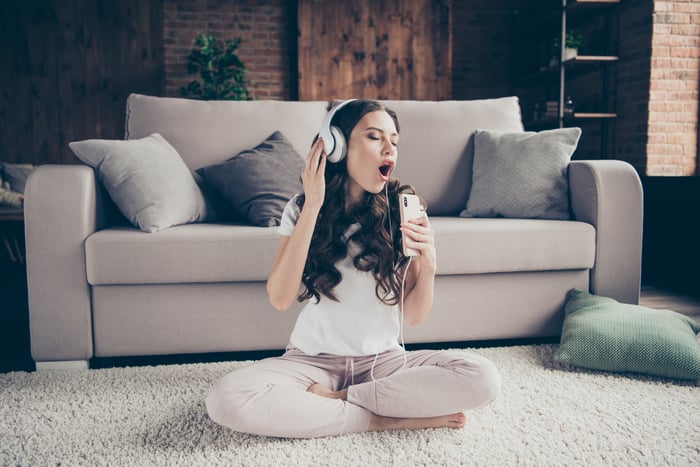 Larger rival Facebook (NASDAQ:FB) finalized its deals with record labels last year, subsequently rolling out features to allow users on its platforms to employ music in user-generated content. TikTok, the karaoke app formerly known as musical.ly, has seen astronomical growth on its platform, underscoring the popularity of music on social media. TikTok parent ByteDance has long had deals with the record labels and is reportedly now looking to launch a music-streaming service.

Snap has not yet reached agreements with record labels and negotiations are still ongoing, according to the report. It's clear that music-oriented features are extremely popular on social media platforms. Snapchat was able to post daily active user (DAU) growth in the first quarter after stagnating throughout 2018, thanks largely to performance improvements in its Android app.

It won't be cheap, though, and could burden Snap's cost structure, which already has trouble scaling. Record labels have been trying to score higher payouts from TikTok, for instance, since the platform's soaring popularity is heavily reliant on the ability to incorporate licensed music. TikTok now has over 500 million monthly active users (MAUs) worldwide.