Please ensure Javascript is enabled for purposes of website accessibility
Log In Help Join The Motley Fool
Free Article
Join Nearly 1 Million Premium Members And Get More In-Depth Stock Guidance and Research
By Matthew DiLallo, Travis Hoium, and Jason Hall – May 28, 2019 at 9:35AM

These companies are well positioned to benefit from the continued expansion of global infrastructure.

The global economy needs reliable infrastructure such as roads, airports, and powerlines to thrive. Because of that, governments must invest massive sums of money to keep their existing systems running properly, and even more to expand them to meet the needs of a growing economy. That required investment spending represents an immense opportunity for companies that operate and build infrastructure assets.

Given the sheer size of the global infrastructure market, investors will want to keep a close eye on the sector. Three infrastructure stocks that our contributors think should be at the top of your watchlist are Brookfield Infrastructure Partners (BIP 0.49%), NV5 Global (NVEE 0.04%), and Mastec (MTZ 0.23%). Here's why they don't want you to miss this trio. 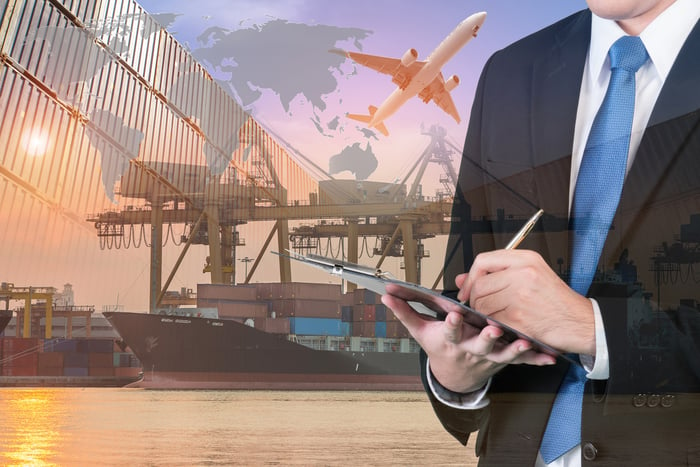 The wheeling and dealing continues

Brookfield Infrastructure has already started the next phase of its capital recycling strategy. It sold a 33% stake in its Chilean toll road operations and recently agreed to cash in on its European bulk port business. These two sales should bring in nearly $400 million. That puts the company well on its way toward its goal of raising another $1.5 billion to $2 billion in asset sales by the end of next year.

The company plans to reinvest this cash into higher-returning infrastructure assets. It's reviewing several opportunities around the world that bear watching. In India, for example, the company is looking at deals in the port and toll road sector as well as in data infrastructure. Meanwhile, it's considering acquisitions that could expand its utilities as well as transportation businesses in other areas around the globe, including reports of its interest in a major rail transaction. The company is also eyeing additional investments in the North American energy infrastructure sector.

This year should be another active one for Brookfield Infrastructure, and that will make it an exciting company to watch. If it can continue making transactions that upgrade its portfolio, then this infrastructure giant could keep generating significant value for investors in the coming years.

A small yet high-growth player in a massive industry

Yet this tiny engineering company is growing quickly. Revenue is up 130% over the past three years while earnings per share has increased 87%. Shareholders have been rewarded with nearly 200% in gains: 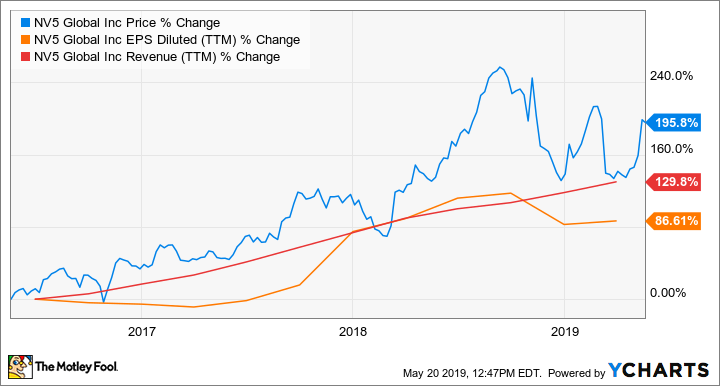 And I think investors should expect sustained market-beating returns over the long term. This founder-led company has proven to be an excellent operator and skilled acquirer with a management team that has many decades of success working together.

Moreover, it looks like a bargain right now, with shares still down about 17% from the all-time high reached last year and trading for less than 20 times management's guidance for this year's adjusted earnings.

However, a recent change in the C-suite is worth noting. Longtime CFO Michael Rama is being replaced with an outsider, Edward Codispoti, in early June. While this is far from a shake-up -- most of NV5's management has been in place since its founding -- this is a key leadership position going to an outsider, and it's important to understand how it affects the company's dynamics. For some investors, this might make NV5 a better watchlist candidate until it becomes apparent how -- or if at all -- this shakes out.

The infrastructure company that does it all

So far in 2019, there's very little for investors not to like with Mastec's results: $1.52 billion of revenue in the first quarter of this year was up 8.7% from a year ago and $8 billion of backlog over the next 18 months points to a bright future.

Energy markets have driven growth thus far this year, with oil and gas revenue up 15.8% to $621.3 million and power generation and industrial segment revenue up 61.1% to $189.4 million. Both markets can ebb and flow over time, but right now they're demonstrating strong demand and that's driving growth.

Oil prices have had a volatile last 12 months, but the steady improvement in oil in 2019 should lead to strong spending from infrastructure customers for the foreseeable future. That means Mastec will continue to see the windfall of higher infrastructure spending and will be a good place to look for falling demand if that comes down the pipeline in the next few years. Either way, it's a great infrastructure company to watch this summer.

Why I Own Brookfield Infrastructure Partners
420%