Talk of selling a minority stake has this railroad on the fast track.

Shares of railroad operator Genesee & Wyoming (GWR) climbed as much as 9.1% on Monday following reports that the company is exploring strategic options, including a potential sale of a minority stake.

Genesee & Wyoming, which operates short-line and regional railroads in North America, Australia, and Europe, is working with a financial adviser and has held early talks with potential suitors including Brookfield Asset Management (BAM -6.19%) about an investment, according to a Bloomberg report. The company's shares are up 16.9% year to date, or about 7% before Monday's jump. 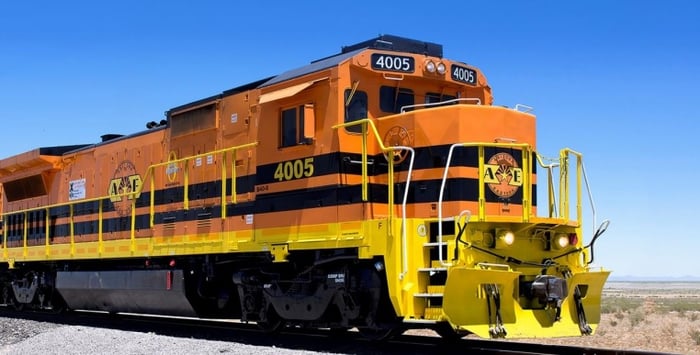 The company last month reported adjusted fourth-quarter earnings of $1 per share, up 30% year over year and beating the $0.91 consensus estimate. For the full year, North America led the way with revenue up 6.6% and adjusted operating profit up 10.7% on increased carloads and higher margins, helping to offset more moderate profit growth in Europe and weakness in Australia.

It's dangerous to invest based on buyout speculation, especially when the reported suitors are said to be only considering an investment and not a full takeover that would reward investors with a takeover premium. Still, Genesee & Wyoming is an intriguing investment regardless of takeover talk.

The company's fortunes are tied closely to the economy, and in recent years it has succeeded in taking market share from truckers. Given new regulations on trucking, driver shortages reported by trucking companies, and constraints in acquiring new trucks, the railroad should have the ability to continue to take share in 2019 and beyond.