Please ensure Javascript is enabled for purposes of website accessibility
Log In Help Join The Motley Fool
Free Article Join Over 1 Million Premium Members And Get More In-Depth Stock Guidance and Research
By Matthew DiLallo – Updated Apr 23, 2019 at 11:30AM

The regional rail operator delivered a solid finish to the year.

Genesee & Wyoming (GWR) initially thought that the fourth quarter might not be as strong as the previous ones due to some possible headwinds. However, the company more than overcame those issues to post solid results to end 2018.

While revenue barely nudged higher due to foreign-exchange fluctuations, earnings leaped. The company did a solid job holding down costs, which boosted margins. The regional railway operator expects healthy earnings growth to continue in 2019 as North American volumes keep rising while it maintains a firm lid on expenses. 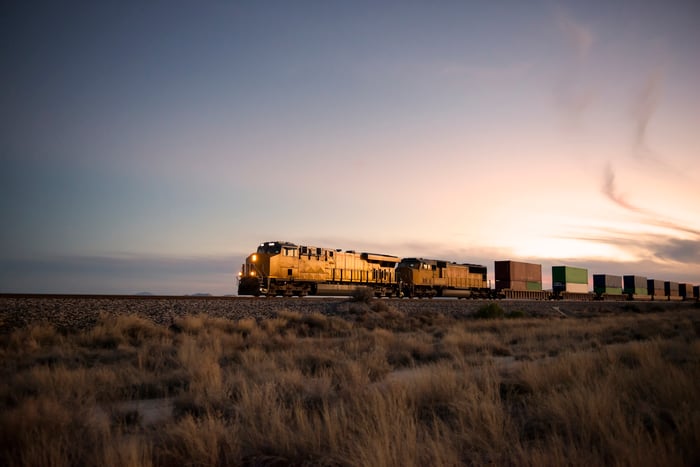 CEO Jack Hellmann commented on the company's quarterly results by stating that: "Our adjusted diluted EPS increased 30% to $1.00 in the fourth quarter of 2018, led by a 17% increase in our North American operating income due to 5.8% growth in carloads and a 250 basis point improvement in our operating ratio. The strong results in North America more than offset weaker performance in our Australian and U.K./European operations."

Strength in the company's North American segment during the fourth quarter continued to drive its performance. For the full year, North American revenue grew 6.6%, while adjusted operating profit increased 10.7%, thanks to an increase in carloads and higher margins, which helped offset more moderate profit growth in U.K./Europe and weakness in Australia.

Genesee & Wyoming "expect[s] double-digit adjusted diluted EPS growth in 2019," according to Hellmann. The CEO further noted that the company generated record cash flow last year, which provided it with the money to repurchase shares, as well as pay down its credit facility, leaving it with about $455 million in available credit. That gives it the financial flexibility to "continue to evaluate potential investments in multiple geographies, as well as investments in our own shares," according to Hellman.