There is probably no bigger battleground stock today than Tesla (NASDAQ:TSLA). The Elon Musk-led electric-car maker garners fierce reactions from both sides of the investing aisle. Bulls say that Tesla will not only produce superior vehicles, but also change the entire transportation system, while bears focus on the company's underwhelming first quarter, incoming competition, stretched balance sheet, and Musk's unconventional behavior.

One of the more prominent Tesla bulls is ARK Invest, which manages the ARK Innovation ETF (NYSEMKT:ARKK), among other specialized ETFs focused on next-generation disruption. ARK had previously put forth a bull case for Tesla of $4,000 per share, which it just upped to a staggering $5,905. That is, needless to say, significantly higher than the $190 per share price tag today. That price target is largely due to Tesla's opportunity in the autonomous robo-taxi industry, but given that that business doesn't exist today, those assumptions may be a tad aggressive.

However, even ARK's "bear" case calls for a valuation of $590 to $1,200 per share just based on the electric vehicle opportunity alone. ARK, to its credit, was good enough to put its valuation model up on Github. But upon looking over the model, I'd say that Tesla bulls had better hope the autonomous robo-taxi business comes to fruition, because there's a pretty big hole in the "auto-only" bear case. Here is what I took issue with.

Tesla needs to be more than just a car company. Image source:Tesla.

I'm not quibbling with any of ARK Invest's assumptions going into the model. In its "bear case," ARK projects Tesla selling 1.7 million vehicles in 2023, which ARK estimates would be around 11% of its estimated 26.4 million-car EV market at that time.

For reference, 86 million cars were sold worldwide in 2018, so ARK is proposing that EVs make significant headway from their single-digit market share of overall car sales today.  That EV market growth projection is more aggressive than some believe, but ARK Invest believes it will happen due to battery cost declines. If that does happen, ARK's market share estimates may actually be considered fairly conservative, as Tesla currently has 17% of the current EV market.

ARK also projects a $48,250 average selling price, along with 25% gross margins. Those projections may be a tad aggressive, but not totally unreasonable, considering Tesla has 18.3% gross margins today. 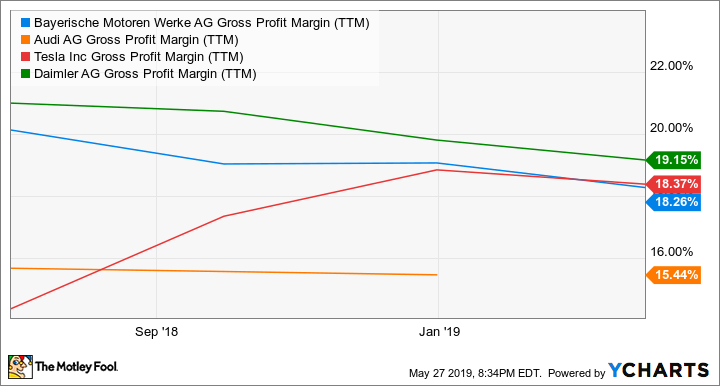 So, what's wrong with ARK's model? It comes down to how it values the company. ARK uses a curious metric called enterprise value (EV) to EBITDAR&D, which is earnings before interest, taxes, depreciation and amortization, research and development.

That's a lot of exclusions!

This may not be the way to think about it

Now, many analysts use EBITDA as a metric for valuing companies, though investors should not think for one second that EBITDA is the same thing as operating cash flow. Businesses usually need to reinvest in their factories and technical capabilities just to stand still -- especially capital-intensive businesses like autos. That's why Warren Buffett and Charlie Munger hate using EBITDA has a valuation metric.

Admittedly, in technology companies or biotechs, it is a prudent idea to capitalize R&D. Their main investment in future growth comes from research and development. Just as with any asset, the research and development asset should be depreciated over time. If the company is growing, a chunk of current R&D could be considered "growth" investment and thus a form of capital spending.

But notice I said part of R&D spending. It's unlikely -- if not impossible -- that Tesla would ever bring its research and development budget down to zero. In fact, Tesla structurally has much higher R&D expenses as a percentage of revenue than its auto peers.

ARK models Tesla spending 13% of its revenue on R&D, as opposed to just 4.3% for the average car company. Therefore, by capitalizing R&D, ARK is "putting back" much more into the EBITDAR&D figure for Tesla than for its rivals. Basically, this valuation metric makes Tesla's profitability look much better relative to its peers.

Consider this -- ARK's model estimates 2023 EBITDAR&D at $14.9 billion, but operating income that same year at only $2 billion. Even if you capitalize the R&D, if 2023 R&D is viewed as a necessary capital investment, it should have the same impact on free cash flow as an immediate expense would.

So while ARK's 8x EBITDAR&D "sounds" reasonable, its 2023 $119 billion enterprise value estimate equates to almost 60 times operating income! I'm not sure about you, but I'd never pay 60 times operating income for a relatively mature automobile company. For comparison, current auto leaders such as General Motors (NYSE:GM) and BMW (OTC:BMWYY) tend to have have EV-to-EBIT ratios in the mid-teens, so if, say, one puts a (generous) 20x EV to EBIT multiple on that $2 billion in 2023 operating income, Tesla's enterprise value comes down to $40 billion, a tad less than the current $44 billion EV today.

That doesn't mean the Tesla thesis is dead

Now notice that I'm not taking issue with ARK's bull case, which suggests that a fully autonomous robo-taxi service that could lift Tesla's share price into the multi-thousands. That's not because I think it's right; it's just that nobody has seen a mature autonomous taxi service, and thus its cash flows. Admittedly, Tesla does have some very exciting technology around autonomous driving, which could give it an advantage over Waymo and Cruise. And who knows? Such a service could very well be worth hundreds of billions of dollars one day.

However, this is a futuristic project that hasn't come to market yet. In fact, Consumer Reports just panned the current version of Tesla's autopilot, so ARK's bull case isn't automatic, to say the least.

My main quibble remains with the non-autonomous taxi, auto-only valuation of $590 to $1,200 per share. As shown above, that type of thinking requires a ludicrous multiple on a mature auto company. Therefore, don't buy Tesla for the car thesis alone. It needs to disrupt the mobility industry (and maybe others) for the bull case to pan out.