Shares of Dollar Tree (NASDAQ:DLTR) moved higher today after the company turned in solid comparable-sales growth in its first-quarter earnings report, and showed evidence that it was turning around the Family Dollar business. The company also said it would begin selling some items for more than $1 at Dollar Tree. A strong report by rival Dollar General may have helped push the stock up as well. As of 1:43 p.m. EDT, the stock was up 3.6%.

The discount retail chain said that same-store sales increased 2.5% at Dollar Tree stores and 1.9% at Family Dollar locations, or 2.2% across the business. This marked the 45th consecutive quarter of same-store sales growth at its namesake chain. 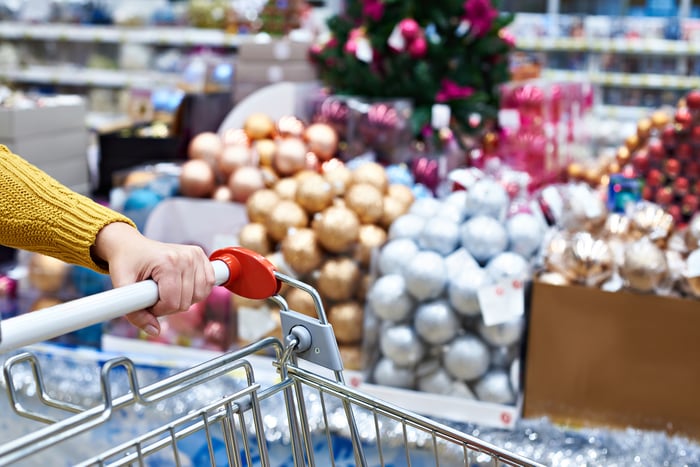 Overall revenue increased 4.6% from $5.55 billion to $5.81 billion, edging out estimates of $5.79 billion. But gross margin fell from 30.6% to 29.7%, thanks to lower markups at Family Dollar, and higher occupancy costs due to plans to close some Family Dollar stores this year. Selling, general, and administrative expenses also rose 40 basis points to 23.1%, and as a result, operating income fell from $437.6 million to $385.5 million.

Adjusted earnings per share fell from $1.19 to $1.14, which matched estimates.

In the report, Dollar Tree said that at select stores it would begin testing Dollar Tree Plus!, a program to sell some goods for more than $1. Unlike Dollar General or Family Dollar, which sell a wide variety of sundries at differing price points, all of Dollar Tree's merchandise costs $1. Management also said that the Family Dollar turnaround was gaining traction, and that operating margin would improve in the second half of the year as it capitalizes on recent investments.

While Dollar Tree still has work to do on its turnaround, the same-store sales growth at Family Dollar was encouraging, and the Dollar Tree Plus! plan could help drive further growth. For now, the company is clearly making progress.