Canadian Solar (CSIQ -1.05%) is one of the most successful solar manufacturers in the world, with 9.1 gigawatts (GW) of solar module manufacturing capacity and one of the biggest solar projects development arms. But it's having trouble making money, just like every other solar manufacturer.

The specifics of losses change year to year depending on solar panel prices and the value of projects, but the broad strokes are always the same: Commodity solar panel manufacturers have a hard time making money because the market is constantly going into oversupply, and developers fight so hard to win contracts that it's difficult to build a sustainable project business. And first-quarter results showed that the struggle is continuing in 2019. 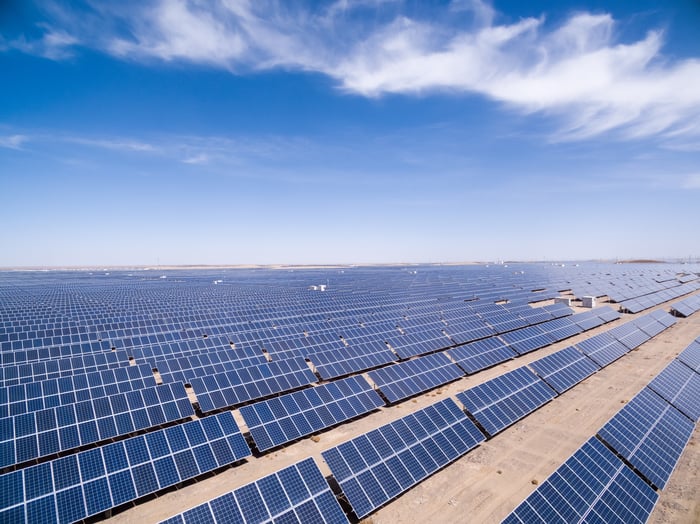 On a big-picture level, Canadian Solar shipped 1,575 megawatts (MW) of solar panels, which came in above guidance of 1,300 MW to 1,400 MW. But revenue was just $484.7 million, down from $1.42 billion a year ago, because high-margin solar power project sales were just $24.6 million. That's a significant drop from year-ago numbers, which were in the neighborhood of $900 million based on the company's breakout of sales across segments.

Revenue per watt, even if you include project sales, was just $0.31, extremely low by historical standards. Despite a 22.2% gross margin for the quarter, Canadian Solar lost $17.2 million, or $0.29 per share.

What's on the balance sheet

Canadian Solar has increased its reliance on solar power project sales to make money, and still has 983.6 MW on the balance sheet, with an estimated value of $1.2 billion. Those projects have $735 million of debt associated with them.

Total debt stood at $1.92 billion at the end of the quarter, which is offset by $912.3 million of cash and equivalents. Net debt excluding project debt is only about $273 million, so the balance sheet is relatively healthy for a solar manufacturer.

Project profits will be key

It's remarkable that Canadian Solar can generate margins above 20% in solar manufacturing, and that's encouraging for investors. The company has benefited from wafer costs falling faster than solar panel prices, which creates an arbitrage opportunity for now. Canadian Solar has 5,000 MW of wafer capacity, and has grown module capacity to 9,130 MW in the second quarter of 2019.

What investors will need to watch going forward is where project margins trend. The company needs high-margin project sales to be profitable, and competitors haven't had as much luck making money on projects long-term.

Management expects shipments of solar panels to pick up in the second quarter to 1,950 MW to 2,050 MW, and revenue is expected to jump to $970 million to $1.01 billion on higher project sales. But gross margin is expected to fall to 13% to 15%, as one project will be sold at a low margin.

Supply and demand for solar panels will ultimately drive Canadian Solar's results in the back half of 2019 and determine if this will be a profitable year. Over the last two years, supply has exceeded demand, which has led to falling solar panel prices and reduced profitability for manufacturers. But the U.S. and China, the world's two biggest markets, show signs of life, and that could mean a bright future for one of the biggest solar manufacturers in the world.