The footwear and accessories retailer formerly known as DSW still needs to prove the value of its acquisitions.

Often, companies that are going through major transformations change their names to give themselves identities that match up more accurately with their new strategic directions. That was the case for Designer Brands (DBI 5.18%), which formerly carried the name of its DSW Shoe Warehouse unit, but which has made significant acquisitions in order to expand its market and pursue new opportunities in the footwear and accessories space.

Coming into Designer Brands' fiscal first-quarter report, shareholders had hoped for signs that the company's recent moves were beginning to bear fruit, and signal that the business was headed toward a full recovery. The retailer did indeed generate some enthusiasm with its report, but a closer look at the numbers shows that it has a long way to go before it can claim complete success in its restructuring efforts.

How Designer Brands started off 2019

Designer Brands' Q1 results clearly reflected the impact of the acquisitions on the company's overall business. The retailer posted revenue of $870 million, up 22.5% from year-ago levels. Adjusted net income of $33.6 million was up a more modest 7% over the same period, and adjusted earnings of $0.43 per share were in line with the consensus forecast among analysts following the stock. 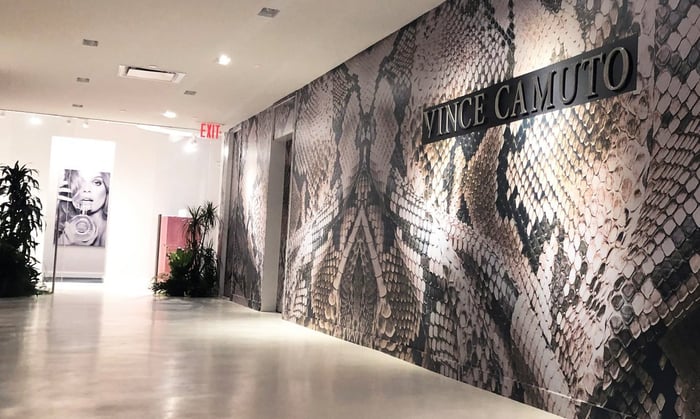 Overall, Designer Brands had some good things to say about its performance. Comparable sales rose 3%, and although that wasn't as strong a gain as it reported three months ago, it was also being measured against a solid year-ago quarter. Meanwhile, its new Canada retail and brand portfolio segments contributed roughly $91 million in sales to external customers -- a small, but meaningful, portion of Designer Brands' total revenue.

The footwear and accessories retailer delivered a more mixed message on the fundamental front. On one hand, gross margin climbed by half a percentage point to 29.4% as it improved its U.S. retail unit's efficiency. That was a nice rebound from last quarter's gross margin decline. However, costs associated with Designer Brands' acquisitions significantly weighed on operating profit, causing operating margin to drop to just about 5%.

CEO Roger Rawlins said he was happy with all three of Designer Brands' key businesses. "Our DSW banner, the Shoe Company banner, and Camuto Group all performed at or above our expectations," he said, "with the U.S. retail and [Affiliated Business Group] segments delivering positive comparable sales." The CEO also pointed to good progress in Canada and the recent Camuto Group acquisition as encouraging signs for further growth.

Designer Brands has high hopes for the future. In Rawlins' words, "The infrastructure we have created, combined with the talent of our teams, has elevated our operating model, giving us the platform to accelerate market share growth in North America."

The retailer let that optimism work its way into its earnings guidance: It boosted its full-year projections to a new EPS range of $1.87 to $1.97, which was $0.07 higher than its previous forecast. Elsewhere, the company didn't make any major changes to guidance, keeping its projections for low double-digit percentage growth in revenue and low single-digit comparable sales gains.

Investors were initially quite pleased with the report, sending the stock sharply higher on Thursday following the announcement. Yet by Friday, shares had settled back down toward their recent lows. The market seemed gratified to see some progress, but at the same time, investors want more concrete signs of Designer Brands' ability to produce lasting growth from Camuto and its Canadian operations, as well as good results domestically.