The long-fought battle to make movies out of Magic: The Gathering is finally bearing results. Netflix (NFLX -0.90%) has tapped some all-star filmmakers to produce an animated series based on the Magic world.

That's kind of a big deal.

The Magic: The Gathering trading card game is becoming a powerhouse for Hasbro (HAS -0.10%). The toys and games giant routinely lists the game as one of its fastest-growing and most profitable assets, shoulder to shoulder with Monopoly and ahead of classic brands like Transformers or Play-Doh. The company doesn't break out each product's results individually, but management pinned the first quarter's 20% year-over-year growth in gaming products largely on strong sales of Monopoly and Magic.

Hasbro is expanding the classic card game with several online multiplayer games, forming the basis of a healthy esports property. In turn, the popularity of Magic-based video games is driving intense engagement with gaming sessions streamed on Twitch and YouTube. This may not be your grandpa's Magic: The Gathering sessions, but Hasbro sure isn't complaining about the effective word-of-mouth marketing effect this trend has sparked. 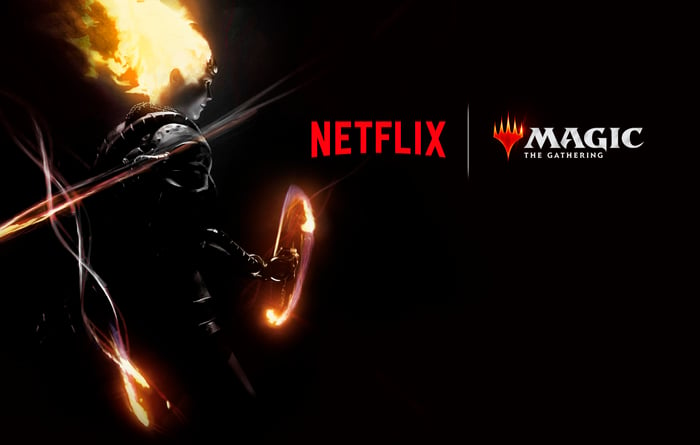 The colorful fantasy world of Magic: The Gathering practically begs for some sort of visualization, whether by movies or TV shows. The screen rights belonged to Universal Studios in 2009, then moved on to Fox five years later, and here we stand at the gates of Netflix instead.

The video-streaming pioneer will rely on proven industry veterans to bring the Magic world to life. As executive producers of this project, you'll find Joe and Anthony Russo, fresh off their record-breaking directing efforts in Avengers: Infinity War and Avengers: Endgame for Walt Disney.

The series will also showcase creators involved in other high-quality science fiction and fantasy fare like Agent Carter and Spider-Man: Into the Spider-Verse. This cast of behind-the-scenes characters bodes well for the new show's storytelling quality. Netflix's global video platform also meshes naturally with Magic and its highly international fan base.

"Our goal is to not only tell a compelling story leveraging Magic: The Gathering's incredible body of work, but to also push the medium and perception of storytelling through animation," said Issac Krauss, CEO of animation studio Octopie, which will handle the heavy visual lifting. "This series will cross the genres of suspenseful thriller, horror, and drama with deeply developed characters the likes of which are not often seen in animation."

The upshot: Magic should work wonders

Krauss' visionary attitude seems to hint at Netflix trying some new tricks with the Magic property. The company could push for some of the interactive programming that we've seen in Black Mirror: Bandersnatch and Puss In Boots. The game-based story world might even inspire Netflix and its partners to push the agenda even further into a game-like experience.

There's no word on exactly when Magic fans should expect the curtain to rise, nor did Hasbro and Netflix disclose the budget or length of this deal. Netflix has been quick on the draw when it comes to driving animated series from announcement to premiere: Aggretsuko hit the streaming service just four months after the original announcement, for example. That's not an entirely fair comparison since that show was based on an existing series of one-minute films on Japanese television, but you can see that Netflix prefers to move as fast as possible.

Hasbro is throwing fuel on the fires of Magic: The Gathering 's booming popularity and should reap substantial rewards from this effort. As for Netflix, this is another brand-name feather in an already crowded cap -- not a game-changer, but a welcome addition to a growing portfolio of kid-friendly content.