The HSA provider posted soaring revenue and earnings again in the first quarter.

HealthEquity (HQY 1.93%) got off to a great start in 2019, thanks in part to stellar fourth-quarter results. Revenue jumped 25% year over year while earnings skyrocketed 145.5%. However, the stock has given up some of its impressive gains it racked up earlier in the year over the past couple of months.

The health savings account (HSA) provider announced its Q1 results after the market closed on Tuesday. And HealthEquity yet again delivered strong growth. Here's what you need to know from the company's quarterly update. 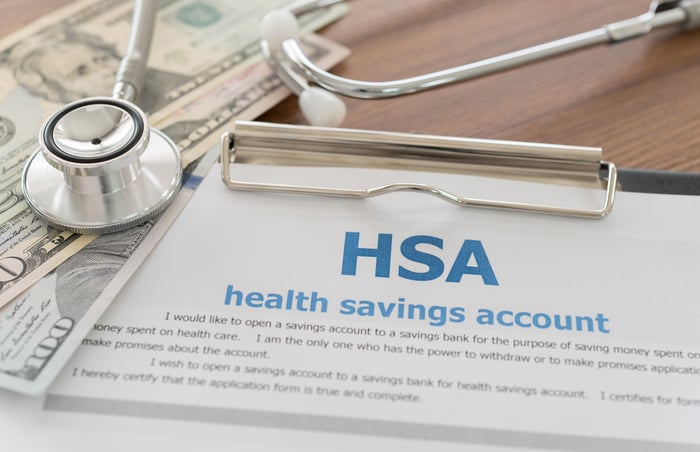 HealthEquity's revenue jumped 25% year over year to $87.1 million. Analysts estimated that the company's revenue for the first quarter would come in at $84.06 million.

On a non-GAAP adjusted basis, HealthEquity's net income in the first quarter was $0.41 per share. That reflected a 32% increase from the prior-year period's adjusted net income of $0.31 per share. It also handily beat the Wall Street Q1 earnings estimate of $0.34 per share in the quarter.

It certainly helped that HealthEquity signed up 89,000 new accounts during Q1. CEO Jon Kessier also said the company "helped our members grow their custodial assets by over $220 million in the quarter."

The company's net income was boosted by its purchase of around 1.6 million shares of WageWorks (WAGE) during the first quarter. This investment increased HealthEquity's earnings by $17.9 million. HealthEquity subsequently proposed a full acquisition of WageWorks, which manages consumer-directed benefits plans.

The growth prospects for HealthEquity continue to look promising. The company thinks that its total addressable market stands at a whopping $1 trillion. HealthEquity currently claims a market share of 15% but is growing rapidly. With HSAs picking up momentum and becoming more familiar with Americans, HealthEquity could have plenty of room to run.