Shares of Fiat Chrysler Automobiles (NYSE:FCAU) dropped sharply in May, after a disappointing first-quarter earnings report was followed by concerns about a potential U.S.-Mexico trade war.

According to data provided by S&P Global Market Intelligence, FCA's share price fell 18.1% over the course of May, ending the month at $12.62.

FCA reported on May 5 that its adjusted operating profit fell 29% from the year-ago period, to just over 1 billion euros, on a 5% drop in revenue as sales slowed in the U.S. and Europe. FCA's overall global shipments fell 14%, to 1.04 million vehicles, and its adjusted EBIT (earnings before interest and tax) margin fell to 4.4% from 5.8% in the year prior.

A surge in Jeep Wrangler sales in the year-ago quarter made for a tough comparison. Image source: Fiat Chrysler Automobiles.

The U.S. sales slowdown wasn't entirely unexpected, as the comparison was a tough one: In the year-ago period, FCA was selling its all-new Jeep Wrangler along deeply discounted outgoing versions, boosting sales for its most important brand. But Europe was a genuinely tough story: Higher costs and competitive pricing pressures pushed the region to a loss on an operating basis.

Concerns about FCA's prospects grew after the Trump administration threatened to impose tariffs of as much as 25% on imported vehicles and parts. FCA has a significant manufacturing presence in Mexico, including two assembly plants that build the Dodge Journey, Jeep Compass, and several Ram pickup models for the United States and other markets. The threatened tariffs would be highly disruptive to FCA's business, at least in the near term. 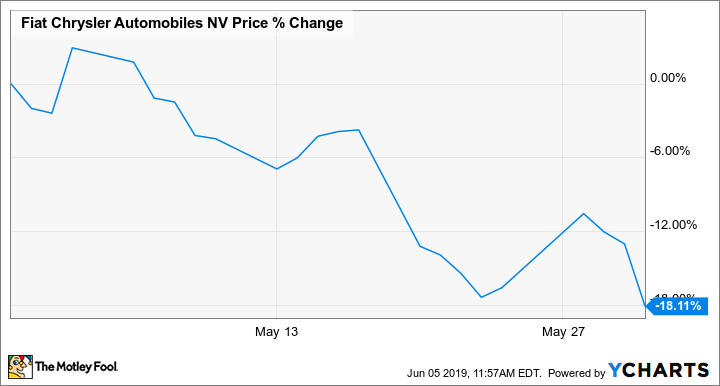 FCA's shares jumped a bit on May 28 after the company revealed that it had sent a merger proposal to French automaker Renault SA (OTC:RNSDF). Renault's board signaled strong interest initially, but political and labor concerns have dimmed investors' hopes that a win-win deal could be put together quickly. Meanwhile, FCA's May U.S. sales totals were juiced by a big jump in fleet sales, feeding investor concerns about slowing retail demand as the trade-war threats linger.