Please ensure Javascript is enabled for purposes of website accessibility
Log In Help Join The Motley Fool
Free Article Join Over 1 Million Premium Members And Get More In-Depth Stock Guidance and Research
By Lou Whiteman - Jun 5, 2019 at 11:07AM

Fears of a slowdown hit the trucking sector.

Shares of Old Dominion Freight Line (ODFL 1.29%) lost 11.3% in May, according to data provided by S&P Global Market Intelligence, as a mix of economic pressures and the threat of a disruptive competitor entering the trucking sector combined to put pressure on the company's shares.

Old Dominion has a reputation as a best-of-breed trucker, and the company's late April release of its first-quarter results did little to dispel that notion. Old Dominion posted Q1 earnings of $1.64 per share, beating the $1.58 consensus, despite slower-than-expected sales of $990.8 million. 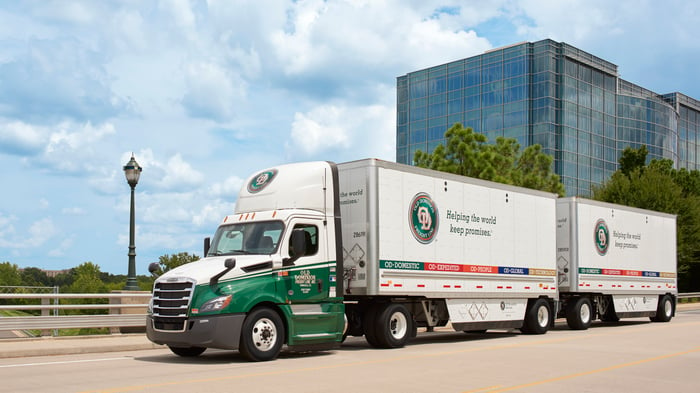 The results were all the more impressive because Old Dominion is driving into what was expected to be a difficult period for truckers. A combination of moderating demand and the shock of trade wars was expected to pressure pricing on contract renewals this spring, and management on the post-earnings conference call said that while pricing was generally stable, "we have recently seen some evidence of competitors losing their discipline."

Add in the negative ripple effect felt throughout the industry from Amazon.com reportedly exploring ways to expand into third-party shipping and logistics, and shares of Old Dominion and other truckers were bound to feel pressure.

In fact, Old Dominion actually held up significantly better than rivals including Knight-Swift Transportation, Schneider National, and USA Truck, which were all down between 17% and 20% for the month.

Old Dominion expressed some confidence in its future mid-month, when the company announced its board had approved a new $350 million stock repurchase program. And indeed, while the trucking industry does tend to be cyclical and downturns can extract victims among weaker players, Old Dominion is built to weather the cycle, and there is no reason for investors to fret about their holdings.

Growth, however, could be hard to come by. Old Dominion seems likely to hold up better than some of its rivals. But with signs of potential pricing pressure up ahead and with uncertainty lingering through the U.S. and global economies, it's possible the entire industry could be stuck in the slow lane for now.

Why Old Dominion Shares Hit the Fast Lane This Week