The largest U.S. bank is experimenting with technology to woo millennials' deposits.

One of the ongoing debates in finance is whether the large U.S. banks will succumb to low-cost, branchless, and "millennial-friendly" fintech upstarts, or whether the large established banks will be able to match these start-ups' digital offerings and beat them at their own game.

JPMorgan Chase (JPM 1.55%), the largest U.S. bank, is right at the center of this debate. Although some may perceive JPMorgan as a stodgy 220-year-old company, it is aggressively investing in and experimenting with the latest digital tools to woo young customers. The company plans to spend $11.5 billion on technology this year alone -- far more than any start-up could on its own.

However, JPMorgan just informed the investing public that it will be shutting down Finn, its digital-only (kind of) bank brand geared toward millennials and younger people. But don't fret that JPMorgan is losing the millennial customer. In fact, Finn's closing could even be a positive signal for the bank. 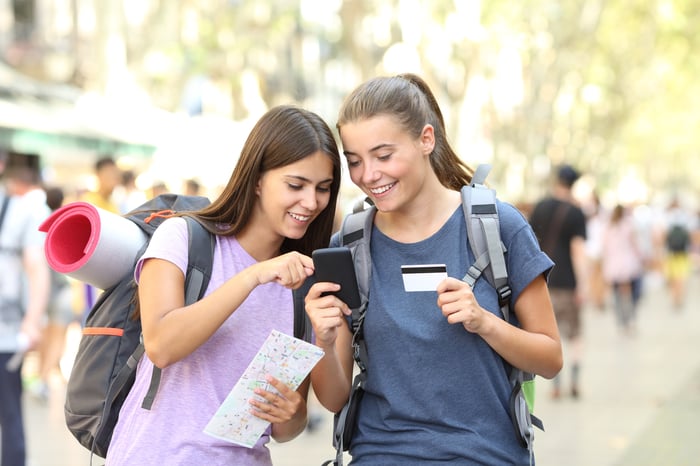 Bringing Finn into the JPMorgan fold

JPMorgan launched Finn in June 2018 on iOS, featuring lots of digital tools such as online-only account-opening and automatic savings programs in the vein of fintech start-up Acorns, which counts PayPal Holdings (PYPL -1.66%) as an investor. Other features of Finn included allowing customers to rate how certain purchases made them feel, along with more practical features like fee-free access to Chase ATMs nationwide.

However, Finn only attracted some 232,000 customers in the past year, according to research firm Sensor Tower. Rather than shutting them out, however, JPMorgan will switch them over to the Chase app, where customers can now use much of the same Finn functionality.

No need to pretend

While it may seem that Finn is a failure, it may just be the case that JPMorgan had adapted its own in-house digital offerings to the point where it didn't make sense to have two separate, yet largely identical, services. In fact, a JPMorgan spokeswoman said that more than half of Finn users already had a Chase relationship.

In addition to functional overlap, one of the goals JPMorgan had for Finn was to allow Chase to penetrate geographies where it didn't have a branch presence; however, that territory will soon diminish, due to Chase's new strategy of expanding its branch footprint, after years of closing branches down. In its first territorial expansion since the financial crisis, Chase plans to open 400 locations over the next five years in 15 to 20 new markets, such as Washington D.C., Philadelphia, Boston, and Nashville.

Since Chase will be expanding into many new regions anyway, executives apparently thought that the regular Chase app, along with better access to branches, could be the best vehicle to deliver the company's new and improved digital services. In fact, JPMorgan's 50.7 million digital customers already give it a healthy lead over Bank of America's (BAC 0.83%) second-place 37 million. Numbers like that, combined with a bigger national footprint, likely made the 232,000 Finn customers more of a redundancy than a new business.

Finn was another piece of JPMorgan's strategy to get ahead of digital rivals, supplementing other millennial-friendly features like Chase You Invest, Chase's new low-cost online broker with $2.95 trades (below many of the lowest-cost online-only brokerages). Chase didn't feel the need to change the brand name of its online broker, or rename its new budget-builder tool, or any other features under Chase Mobile, so why incubate an entirely new bank brand from scratch?

When you think about it, it's a bit odd that Chase and other big-bank rivals have even started national online-only brands separate from their core business. If young people have such a bad association with bank brands due to their experience growing up during the Great Recession, banks should probably put more effort into improving their digital experiences and rehabilitating their image. Instead of trying to trick millennials into thinking a JPMorgan-backed online start-up is really a new, user-friendly, hip company, why not just make JPMorgan more young, user-friendly, and hip?

JPMorgan appears to be coming around to that realization, and, to its credit, the bank has put lots of customer-friendly features in the core Chase banking experience, including the best features and lessons learned from the Finn experiment.

In the battle between fintechs and big banks, big banks may be capable of becoming cool again. All they need to do is develop customer-friendly features to earn their reputation back. If large banks stay focused on that, they should be able to fend off the fintech threat.