They might be this year's Bad News Bears, but I think these three stocks will be long-term winners.

I just checked to see how the stocks that I own are performing. It's not something that I do very often, although I do keep close tabs on the business developments related to each of my positions. Despite the market downturn over the past few weeks, I was pleased to learn that my stocks are doing pretty well overall.

Eight of the 27 stocks that I own have delivered year-to-date gains of 20% or more. Another six are up by double-digit percentages. Overall, my portfolio is beating the S&P 500 index so far this year, 17% to 12%. 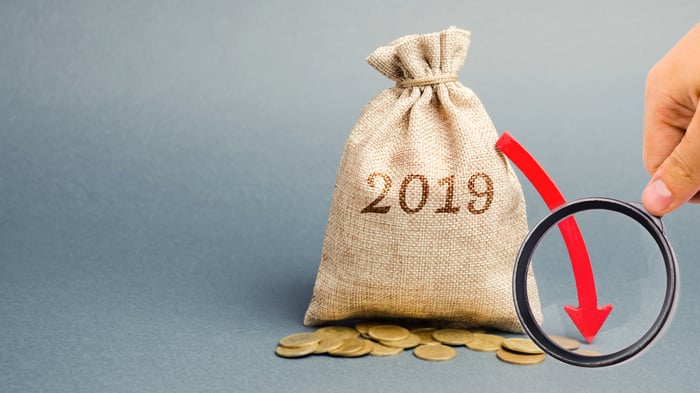 You might have noticed that there's a common denominator for my three worst stocks of the year: They're all drug stocks. That isn't surprising considering that the healthcare sector overall is performing well below the broader market indexes.

Quite frankly, the current environment isn't a very good one for many healthcare stocks. I even floated the idea several weeks ago that this could be the most dangerous time ever to invest in healthcare.

Both Democrats and Republicans have targeted escalating prescription drug costs as a major issue to address. And a significant number of Democratic presidential candidates are promoting a single-payer healthcare system. Whatever you think about the merits of such a plan, there's no question that it would result in a major upheaval for many healthcare companies, including drugmakers.

There's another common denominator for AbbVie, Editas, and Pfizer. Each of these stocks delivered much higher returns in the recent past. In 2017, for example, AbbVie was one of my best-performing stocks, soaring more than 50%. That year Editas skyrocketed 89% (unfortunately, though, I didn't own it then). And in 2018, Pfizer jumped nearly 21%, trouncing the S&P 500. So while they're losers so far in 2019, they haven't always been losers.

AbbVie, Editas, and Pfizer haven't floundered so far this year just because of the political uncertainties related to the U.S. healthcare system. Each of these stocks also has its own unique reasons for underperforming.

In January, AbbVie posted disappointing 2018 fourth-quarter results. The big pharma company missed Wall Street estimates for both revenue and earnings. Even worse, AbbVie provided weak guidance for full-year 2019 due to sinking international sales for its top-selling drug Humira, which now faces competition from biosimilars in Europe.

There was also more bad news for AbbVie. The U.S. Food and Drug Administration (FDA) placed a partial clinical hold on studies evaluating Venclexta in treating multiple myeloma after a higher proportion of deaths was observed in a late-stage study among patients receiving the drug compared to those on placebo. AbbVie's Depatux-M also flopped in a late-stage clinical study targeting the treatment of glioblastoma, an aggressive type of brain cancer.

Editas Medicine's CEO unexpectedly left the company in January, causing its stock to plunge. And the news came only a few weeks after the biotech's CFO announced his resignation.

Pfizer faces headwinds from key drugs losing patent exclusivity, which resulted in the company providing lower-than-expected full-year 2019 revenue guidance. Blockbuster erectile dysfunction drug Viagra already lost patent exclusivity. Another of the company's top-selling drugs, Lyrica, loses exclusivity this summer. Overall, Pfizer's revenue will be negatively impacted to the tune of around $2.6 billion this year due to these headwinds.

Does all of this have me worried? Am I fretting over what I should do with these anchors dragging down my portfolio's returns this year? No and no.

It's not that I'm ignoring the negative news. I'll admit that when Editas announced the departure of its CFO and then its CEO I was concerned. I wasn't pleased with AbbVie's pipeline setbacks or that both AbbVie and Pfizer gave relatively weak guidance for 2019.

However, the reason why I'm not selling any of these three stocks despite their bad news this year is simple: I still believe in their long-term prospects. When you look at stocks with a long-term mindset, events that cause stumbles over the short run don't bother you nearly as much as they otherwise would.

Yes, AbbVie faces declining sales for Humira due to competition from biosimilars. Yes, Editas Medicine's executive team has gone through a shake-up. Yes, Pfizer must deal with key drugs losing exclusivity. But I still think all three companies will be big winners over the long term.

AbbVie's current lineup includes drugs with soaring sales like Imbruvica, Orilissa, and Skyrizi. Another immunology drug with blockbuster potential, upadacitinib, should launch later this year. Pfizer appears to be positioned to return to solid growth after 2020. In the meantime, both stocks pay mouth-watering dividends.

Editas is set to begin the first ever in vivo (in the body) clinical testing in humans of a CRISPR gene-editing therapy this year. If it's successful, the biotech's lead candidate EDIT-101 could literally cause the blind to see.

I'm not talking about just thinking positive thoughts about AbbVie, Editas, and Pfizer along the lines of Norman Vincent Peale's book The Power of Positive Thinking. Instead, I'm adhering to what you might call the power of long-term thinking.

This way of thinking allows me to hold onto stocks that underperform for a while. By the way, one of my worst stocks of last year, Celgene, is in my top three stocks so far this year. That's the power of long-term thinking at work.